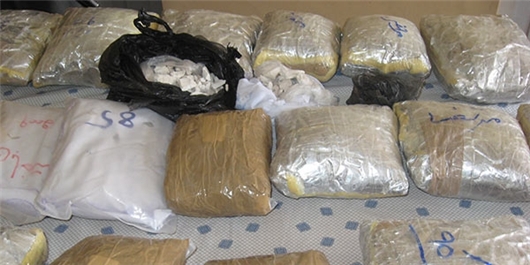 TEHRAN (FNA)- The anti-narcotic combat police of Iran’s Fars province have seized more than 16,000 kilograms of illicit drugs in the first half of the current Iranian year (March 21-September 22, 2014), the provincial police chief said.

“We will try to confront the drug traffickers more seriously during the second six months of the year by strengthening our forces, fortifying our police stations, and increasing our check points throughout the Fars province,” Brigadier General Ahmad Ali Goudarzi.

He said that 70 police stations in Fars province are being renovated and equipped with modern facilities now and within the next two days a large number of new vehicles will be delivered to the provincial police force, increasing the maneuverability and capabilities of the disciplinary forces in the province.

Iran's geographical position has made the country a favorite transit corridor for drug traffickers who intend to smuggle their cargoes from Afghanistan to drug dealers in Europe.

Sistan and Balouchestan province, where Iran, Pakistan and Afghanistan come together, has porous borders, where bandits and drug traffickers operate despite frequent entanglements and intense efforts of the Iranian law enforcement police.

Iran has recently established a central database and strengthened police-judiciary cooperation in a new effort to combat organized crime.

The Iranian anti-narcotic police have always staged periodic, but short-term, operations against drug traffickers and dealers, but latest reports - which among others indicate an improved and systematic dissemination of information - reveal that the world's most forefront and dedicated anti-narcotic force (as UN drug-campaign assessments put it) have embarked on a long-term countrywide plan to intensify the crack down on the drug trade since the beginning of the current Iranian year (starting on March 20).

According to official estimates, Iran's battle against drugs cost the country around $1 billion annually. Strategies pursued by Tehran include digging canals, building barriers and installing barbed wire to seal the country's borders, specially in the East.

Iran has long complained that the global community, specially the western nations, do not contribute their role in the campaign against drugs, saying that Iran is making lone efforts to block the transit of narcotics from Afghanistan to Europe and the US. Meantime, the Iranian police officials maintain that drug production in Afghanistan has undergone a 40-fold increase since the US-led invasion of the country in 2001.

While Afghanistan produced only 185 tons of opium per year under the Taliban, according to the UN statistics, since the US-led invasion, drug production has surged to 3,400 tons annually. In 2007, the opium trade reached an estimated all-time production high of 8,200 tons.