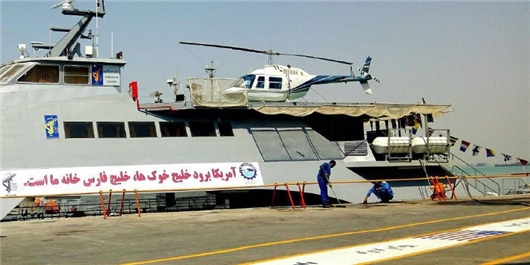 He said that the round-the-clock relentless efforts of the Iranian experts and engineers have paved the way for launching the state-of-the-art vessel with the capability to navigate in roaring waters as well as landing and taking off of the military helicopters which is another achievement for the defense sector.

"The IRGC Navy has always made advacements and made valuable successes and under the current conditions it has made the Islamic Republic of Iran stronger by making use of modern technology and equipment as well as high missile, defense and deterrence power," General Razmjou added.

In May, Commander of the IRGC Navy Rear Admiral Ali Fadavi declared that the IRGC has done all the necessary tests and will soon launch mass-production of modern speedboats that cruise at a speed of 80 knots (148 kilometers) per hour.

"We have been able to increase the speed of our military vessels which are equipped with missiles and torpedoes up to 80 knots and this speed was tested late winter and now we are after mass-producing them," Fadavi said in an interview with the state-run TV.

"This is while the speed more than 35 knots is a dream for the world naval forces and the US vessels can cruise at a maximum speed of 31 knots," he added.

In relevant remarks in March, Admiral Fadavi had said that the IRGC has the only Navy in the world that could design and manufacture this type of boats cruising at 80 knots per hour.

Fadavi had said earlier this year that anti-ship cruise missiles and cannons were previously not available on speedboats, but the IRGC experts managed to mount them on the vessels.

He added that the military vessels, capable of cruising at the speed of up to 120 knots (222 kilometers) an hour, could now be designed and tested at the IRGC naval research laboratory. In the past, he said, Iran had to carry out such tests abroad.

The IRGC commander said the Navy plans to mass produce, within the next few months, speedboats that travel at a speed of 80 knots (148 kilometers) per hour, and are armed with missiles capable of striking targets at 100 kilometers (62 miles).