All of the Starlight in Observable Universe 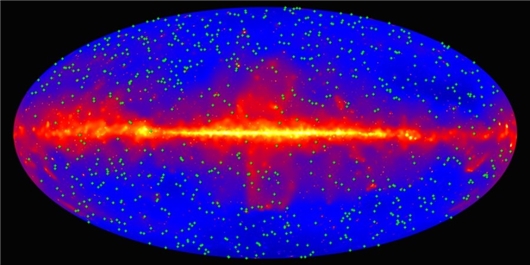 TEHRAN (FNA)- From their laboratories on a rocky planet dwarfed by the vastness of space, scientists have collaborated to measure all of the starlight ever produced throughout the history of the observable universe.

Astrophysicists believe that our universe, which is about 13.7 billion years old, began forming the first stars when it was a few hundred million years old. Since then, the universe has become a star-making tour de force. There are now about two trillion galaxies and a trillion-trillion stars. Using new methods of starlight measurement, Clemson College of Science astrophysicist Marco Ajello and his team analyzed data from NASA's Fermi Gamma-ray Space Telescope to determine the history of star formation over most of the universe's lifetime.

A collaborative paper titled "A gamma-ray determination of the Universe's star-formation history" was published Nov. 30 in the journal Science and describes the results and ramifications of the team's new measurement process.

"From data collected by the Fermi telescope, we were able to measure the entire amount of starlight ever emitted. This has never been done before," said Ajello, who is lead author of the paper. "Most of this light is emitted by stars that live in galaxies. And so, this has allowed us to better understand the stellar-evolution process and gain captivating insights into how the universe produced its luminous content."

Putting a number on the amount of starlight ever produced has several variables that make it difficult to quantify in simple terms. But according to the new measurement, the number of photons (particles of visible light) that escaped into space after being emitted by stars translates to 4x10^84.

Despite this stupendously large number, it is interesting to note that with the exception of the light that comes from our own sun and galaxy, the rest of the starlight that reaches Earth is exceedingly dim -- equivalent to a 60-watt light bulb viewed in complete darkness from about 2.5 miles away. This is because the universe is almost incomprehensibly huge. This is also why the sky is dark at night, other than light from the moon, visible stars and the faint glow of the Milky Way.

The Fermi Gamma-ray Space Telescope was launched into low orbit on June 11, 2008, and recently marked its 10-year anniversary. It is a powerful observatory that has provided enormous amounts of data on gamma rays (the most energetic form of light) and their interaction with the extragalactic background light (EBL), which is a cosmic fog composed of all the ultraviolet, visible and infrared light emitted by stars or from dust in their vicinity. Ajello and postdoctoral fellow Vaidehi Paliya analyzed almost nine years of data pertaining to gamma-ray signals from 739 blazars.

Blazars are galaxies containing supermassive black holes that are able to release narrowly collimated jets of energetic particles that leap out of their galaxies and streak across the cosmos at nearly the speed of light. When one of these jets happens to be pointed directly at Earth, it is detectable even when originating from extremely far away. Gamma ray photons produced within the jets eventually collide with the cosmic fog, leaving an observable imprint. This enabled Ajello's team to measure the density of the fog not just at a given place but also at a given time in the history of the universe.

"Gamma-ray photons traveling through a fog of starlight have a large probability of being absorbed," said Ajello, an assistant professor in the department of physics and astronomy. "By measuring how many photons have been absorbed, we were able to measure how thick the fog was and also measure, as a function of time, how much light there was in the entire range of wavelengths."

Using galaxy surveys, the star-formation history of the universe has been studied for decades. But one obstacle faced by previous research was that some galaxies were too far away, or too faint, for any present-day telescopes to detect. This forced scientists to estimate the starlight produced by these distant galaxies rather than directly record it.

Ajello's team was able to circumvent this by using Fermi's Large Area Telescope data to analyze the extragalactic background light. Starlight that escapes galaxies, including the most distant ones, eventually becomes part of the EBL. Therefore, accurate measurements of this cosmic fog, which have only recently become possible, eliminated the need to estimate light emissions from ultra-distant galaxies.

Paliya performed the gamma ray analysis of all 739 blazars, whose black holes are millions to billions of times more massive than our sun.

When high-energy gamma rays collide with low-energy visible light, they transform into pairs of electrons and positrons. According to NASA, Fermi's ability to detect gamma rays across a wide range of energies makes it uniquely suited for mapping the cosmic fog. These particle interactions occur over immense cosmic distances, which enabled Ajello's group to probe deeper than ever into the universe's star-forming productivity.

"Scientists have tried to measure the EBL for a long time. However, very bright foregrounds like the zodiacal light (which is light scattered by dust in the solar system) rendered this measurement very challenging," said co-author Abhishek Desai, a graduate research assistant in the department of physics and astronomy. "Our technique is insensitive to any foreground and thus overcame these difficulties all at once."

Star formation, which occurs when dense regions of molecular clouds collapse and form stars, peaked around 11 billion years ago. But though the birthing of new stars has since slowed down, it has never stopped. For instance, about seven new stars are created in our Milky Way galaxy every year.

Establishing not only the present-day EBL, but revealing its evolution in cosmic history is a major breakthrough in this field, according to team member Dieter Hartmann, a professor in the department of physics and astronomy.

"Star formation is a great cosmic cycling and recycling of energy, matter and metals. It's the motor of the universe," Hartmann said. "Without the evolution of stars, we wouldn't have the fundamental elements necessary for the existence of life."

Understanding star formation also has ramifications for other areas of astronomical study, including research regarding cosmic dust, galaxy evolution and dark matter. The team's analysis will provide future missions with a guideline to explore the earliest days of stellar evolution -- such as the upcoming James Webb Space Telescope, which will be launched in 2021 and will enable scientists to hunt for the formation of primordial galaxies.

"The first billion years of our universe's history are a very interesting epoch that has not yet been probed by current satellites," Ajello concluded. "Our measurement allows us to peek inside it. Perhaps one day we will find a way to look all the way back to the Big Bang. This is our ultimate goal."