FM: Iran Not to Negotiate With Terrorists in US 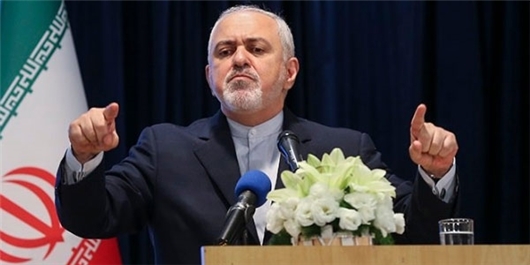 TEHRAN (FNA)- Iranian Foreign Minister Mohammad Javad Zarif blasted the US for continuing its hostilities against Iran, and said that the Islamic Republic will not sit at the negotiating table with the American terrorists.

“The US hostile measures against Iran are economic terrorism and Tehran will in no way hold talks with terrorists,” Zarif said on Sunday, addressing a meeting in the Venezuelan capital of Caracas.

“The US measures constitute economic terrorism. Plain and simple. There is no ambiguity about this. Just search the word terrorism,” the Iranian foreign minister added.

He said that terrorism by definition is the unlawful use of violence and intimidation, specially against civilians, in the pursuit of political aims, adding, “This is Google’s definition of terrorism.”

Zarif went on to say that stop using the word “sanction”. “Sanctions are designed to enforce laws. They are backed by the law, but the US measures are economic terrorism.”

The Iranian foreign minister reiterated that what the United States is currently doing should be called “terrorism”.

He called for boycotting the unlawful use of the word ‘sanction’, “especially the US excessive use of this word to show that its measures are lawful. We need to constantly repeat that what the US administration is doing is economic terrorism. We don’t negotiate with terrorists.”

Zarif ended his visit to Venezuela on Sunday and is currently in Nicaragua’s capital Managua to hold talks with that country’s senior officials on bilateral ties.

In relevant remarks on Sunday, Zarif categorically condemned the foreign policy adopted by the White House, warning that the new wave of Washington’s unilateralism and adventurism is a serious threat to global peace and security.

Addressing a meeting of top diplomats from the Non-Aligned Movement (NAM) in Caracas, Venezuela, on Saturday, Zarif said Washington's modern wave of extremist, unilateral adventurism is the most significant challenge that almost all countries around the world are facing in a way or another.

Zarif made the remarks in a clear reference to a raft of tough economic sanctions imposed by the US on countries like Iran and Venezuela over the past months.

The oil-exporting countries have been deprived of much of their normal revenues as the US President Donald Trump continues to press buyers around the world to cut their crude imports from the two states to zero.

Coupled with punitive economic measures against countries like China and Russia and others in the European Union, the sanctions have represented a growing inclination toward unilateralism in the White House while prompting massive criticism around the world.

Zarif said such unilateral and protectionist view to the international affairs has posed a real threat to the global peace and stability.

A Persian translation of his remarks provided said that the challenge posed by new US policies is weakening the governance of law at the international level while threatening the global peace and stability in various ways.

Zarif cited a decision by Trump in May last year to pull out of a 2015 agreement on Iran nuclear activities as a main example of Washington’s recklessness for international law.

“The US administration is defeating the Iran nuclear deal, despite the investment the whole world made to bring it about,” said Zarif, according to excerpts of remarks reported from Caracas.

“And in the process it has not only breached the relevant [UN] Security Council resolution, but also ironically sanctioned those who try to abide by it,” he added.

The US is currently confronting countries like Iran, China, Russia, some European countries, Venezuela, Cuba, Bolivia and Venezuela with its unilateral moves to pose pressures for securing its own interests.