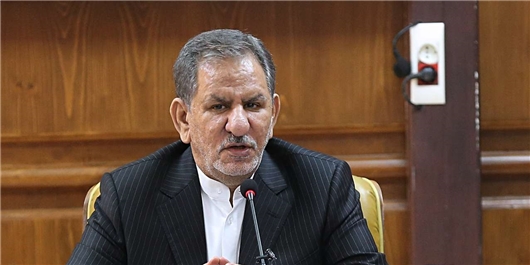 TEHRAN (FNA)- Iranian First Vice-President Eshaq Jahangiri said the country's Armed Forces are guarantors of security in the Persian Gulf region, stressing that Tehran will not bow to the big powers' pressures and bullying.

Iran is honored that it has always stood up to the bullying and maintained status by following international regulations, Jahangiri told reporters in Karaj city near Tehran on Tuesday.

He said the Iranians have always been civilized and played a leading role throughout history.

The secret behind Iranian nation's success was that they have been following a strong logic and dialogue, the vice-president noted.

He acknowledged the need for dialogue to settle international disputes, saying that the most complicated problems can be resolved through negotiation, while pressure and bullying are illogical and irrational.

He referred to the recent developments in the Middle East and the Persian Gulf regions, and said, "We're keen to have a secure and stable region."

Jahangiri pointed to Iran's measures to bring tranquility to the region, and said that the country has always been guarantor of security in the Persian Gulf region.

Meanwhile, he urged all regional countries to help ensure regional security, adding that the foreigners merely bring insecurity wherever they are deployed.

In relevant remarks on Monday, Iranian President Hassan Rouhani described his country as the guardian of security in the Persian Gulf and the Strait of Hormuz, saying that regional issues should be resolved through talks among neighbors.

"Iran has and will be the main guardian of security and freedom of navigation in the Persian Gulf, the Strait of Hormuz and the Sea of Oman during history", President Rouhani said, emphasizing that the Islamic Republic of Iran is not willing to escalate tensions in the region, and will never initiate war and tension.

He made the remarks at a meeting of high-ranking delegations of Iran and Iraq in Tehran on Monday.