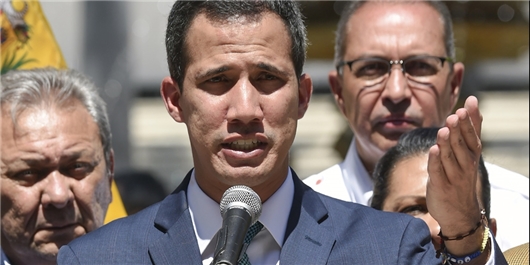 The prosecutor general cited photos published by the Spanish newspaper El Pais which show Guaido together with the leaders of Los Rastrojos. The photos were reportedly made in February.

According to Saab, it was the drug cartel that helped Guaido to cross the Colombian-Venezuelan border despite the entry ban imposed on the opposition leader by Caracas.

Guaido told the Blu radio broadcaster that he had made hundreds of photos with various persons during a humanitarian concert in the Colombian border city of Cucuta.

“It was difficult to understand, who asked me for photos,” the opposition leader stated.

The Venezuelan president stressed that the Colombian people were aware of crimes committed by Los Rastrojos.

"The Colombian people know that this is a gang that kills people every day. Guaido made a photo with four most dangerous criminals, not one of them," Maduro added.

The Colombian foreign ministry announced that two people who were in a photo with Guaido had been detained in June.

"Two men from the photo, disseminated by media, have been detained to date. They are suspected of illegal arms trafficking and criminal group's membership," the foreign ministry said in a statement.

According to the statement, Bogota did not assist Guaido in crossing the border with Venezuela but did ensure his safety when he was in Colombia.

Venezuela has been suffering from a severe political and financial crisis since late January when US-backed Guaido proclaimed himself interim president in a bid to oust President Maduro from power. Maduro has accused Guaido of being a US puppet, working with Washington to orchestrate a coup so that the US can control Venezuela’s vast fossil fuel reserves, the largest in the world.

Colombia has been providing Guaido with significant support since the crisis began.