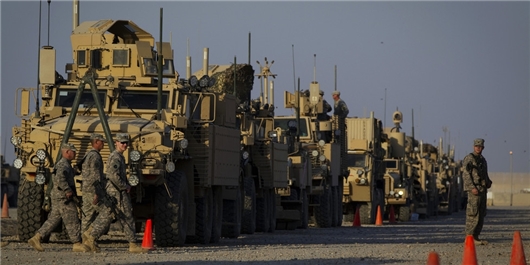 TEHRAN (FNA)- A defense contractor overcharged the Pentagon by more than $1.2 billion for thousands of armored vehicles, a whistleblower’s complaint alleged, while the company threatened employees who refused to go along with the grift.

With Improvised Explosive Device (IED) attacks responsible for more than six in ten deaths of US personnel in Iraq and four in ten deaths in Afghanistan in 2007, the Pentagon solicited designs for a Mine-Resistant Ambush Protected (MRAP) vehicle to replace its thin-skinned Humvees. The military hoped the vehicles’ thickened armor and explosion-deflecting v-shaped hulls would save lives on the battlefield, RT reported.

Navistar Defense, one of the companies contracted to build the new MRAPs, saw green and decided to milk the government for as much cash as possible, according to a complaint filed by a company whistleblower in 2013 and unsealed this week after the US government intervened in the case.

The whistleblower, Navistar’s former contract director Duquoin Burgess, claimed that the company overcharged the government by $1.28 billion for the vehicles and parts. The Department of Justice is now seeking to recover three times that amount in damages from the contractor.

The Illinois-based Navistar built MRAPs for the Marine Corps over a five-year contract period. From the outset, Burgess claims that the company tried to convince the government that the vehicle was a “commercial item”, therefore exempting itself from explaining the price breakdown of its components to the USMC. When the government challenged the company on this, Navistar applied for a waiver to avoid giving this data.

Navistar charged the USMC $250,000 per MRAP chassis, while charging other customers – including other branches of the US military – half that price for the same product, Burgess said in his complaint. The Pentagon ordered 9,000 vehicles with this chassis, which means Navistar’s price-gouging cost the government $1.12 billion.

Navistar charged the Marine Corps between $27,000 and $34,000 for each twin-turbocharged diesel engine sold to the MRAP, almost double the $17,000 they charged private customers. To justify this, Navistar forged documents ‘proving’ it had sold trucks using the same engine to an Illinois-based landscaping company. When Lyons looked into the sales, he found they were completely fabricated, and was “angrily ordered” by supervisors to stop his investigation.

The grift didn’t end after the vehicles were delivered either. As combat in Afghanistan shifted to more difficult mountainous terrain, the Marine Corps asked Navistar to redesign and retrofit the MRAP suspension. Again, the company used forged sales histories and catalog listings to justify the upgrade’s $142,000 price tag.

The suit is a damning indictment of a company taking advantage of the military’s “critical” need to protect the troops. Yet it is far from the first time a defense contractor has bilked the government of millions of dollars. TransDigm Group, a firm that manufactures aerospace components, was found this year to have charged the Pentagon $4,361 for a half-inch metal pin that should have cost $46. The company also charged the government $803 for a $32 bearing, and $8,819 for an oil pump that should have cost $369.

Speaking to Congress about the fiasco, Pentagon official Kevin Fahey accused TransDigm of “gouging our taxpayers”.