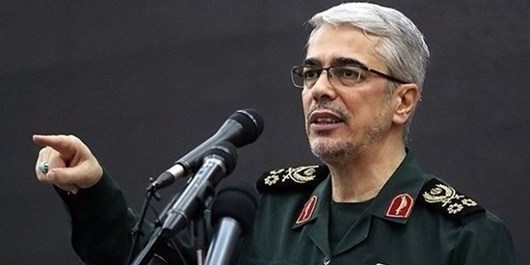 TEHRAN (FNA)- Chief of Staff of the Iranian Armed Forces Major General Mohammad Baqeri urged the world’s Muslims to reinforce their solidarity, and asked the world Muslim states to avoid keeping silent in the face of the US and Israel’s attempts to prevent liberation of the occupied Palestinian territories through the “Deal of the Century” conspiracy.

In a statement addressed to the Muslim world’s defense ministers and army chiefs that was published on Thursday, Major General Mohammad Baqeri sternly warned about the implications of any laxity or silence in the face of the oppressive plot, urging Muslim nations to focus their efforts on healing their differences on the basis of Islamic guidelines amid the situation.

His message concerned US President Donald Trump’s recent announcement of the long-awaited outline of a US scheme purportedly seeking to remedy the Palestinian-Israeli conflict that his administration has controversially dubbed “the Deal of the Century”.

General Baqeri urged the world’s Muslim countries to reinforce their solidarity and overcome their existing rifts in the face of the US and Israel’s attempts to prevent liberation of the occupied Palestinian territories, most importantly the holy city of Jerusalem al-Quds.

“The Muslim world’s first priority is liberation of the Palestinian nation and liberation of the Noble Quds, which is Muslims’ First Qibla (the direction towards which Muslims stand when saying their prayers),” he said.

Washington had announced the plan -- a brainchild of Trump’s son-in-law and advisor Jared Kushner and other key pro-Israeli figures, years ago -- but had withheld the details. Trump announced the general provisions of the scheme on Tuesday, with Israeli Prime Minister Benjamin Netanyahu at his side and in the absence of whatever representative from the Palestinian sides, which have already dismissed the deal.

The US president repeated his hugely-controversial endorsement of al-Quds Jerusalem as Israel’s “undivided capital,” although Palestinians have historically wanted the city’s eastern part as the capital of their future state.

He said the deal featured an economic portion that earmarks $50 billion in monetary allocations to Palestinians, Jordan, and Egypt. Palestinians have denounced this as a means of bribing them into selling their rights.

Still contentiously, Trump said that the settlers, who have been housed in illegal settlements built on occupied Palestinian land, would not be moved under the deal.

The US president, meanwhile, alleged that Israel would be freezing its settlement activities for four years “while Palestinian statehood is negotiated.” Tel Aviv has never fully committed to such freezes, causing any negotiation process to break down.

Elsewhere in his remarks, Iran's top general said, “By divine Grace, not only will the deal of the century fail to materialize, but it will also expedite Israel’s perdition and annihilation by putting the regime through a monumental vortex.”

He called the announcement “a historic and strategic error,” which seeks to pursue the main part of “Zionists’ 70-year-old defeated project in the region,” namely occupation of Palestine.

Iran's military chief noted that the scheme violated the sovereignty of an oppressed nation, and amounted to “declaration of war against its territorial entity and existence.”

Baqeri finally warned that any tacit agreement, inaction, negligence, or double standard approach in the face of the plot threatened to subject other Muslim countries to a yet larger scheme targeting their independence and national sovereignty.

In a Thursday statement in response to Trump’s announcement of the plan that he has dubbed “Deal of the Century”, Iranian Supreme Leader's top adviser for international affairs Ali Akbar Velayati warned of the consequences of the so-called “Deal of the Century” plan, saying that it will further destabilize the region.

He referred to the Palestinian cause as “the most important” issue facing the Muslim world, saying Muslims are obliged to throw “unequivocal support” behind Palestine by “using all material, spiritual and media capacities, public diplomacy, holding rallies and enlightening public opinion.”

Velayati further warned of the repercussions of such a plan, including destabilizing the region and violating numerous UN resolutions on the Palestine case.

“The deal of the century will lead nowhere,” but rather consolidate unity in the Muslim Ummah and muster support for the oppressed Palestinian nation from the world’s freedom- and justice-seeking people and the entire international community, he said.

Late on Tuesday, the Iranian Foreign Ministry lashed out at Trump's so-called "Deal of the century" as a great betrayal to the causes of the Palestinians and all Muslim nations of the world, urging all Islamic countries to get united, regardless of differences and disagreements, to fight against the “treason of the century”.

"The Zionist regime is an occupying regime and the only solution to solve the Palestinian crisis is a referendum among all main residents of the Palestinian land and such vicious plans are doomed to failure," Iranian Foreign Ministry Spokesman Seyed Abbas Mousavi said.

He called on all free nations and governments in the region and across the world to counter Trump's disgraceful scheme.