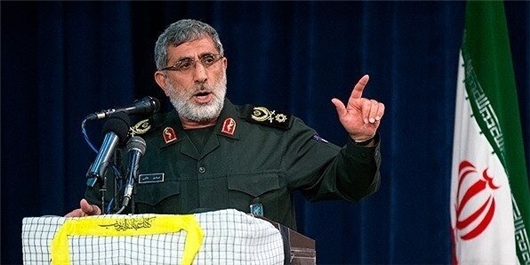 In a phone conversation with the leaders of Palestinian resistance groups on Sunday, Brigadier General Qaani reaffirmed the Islamic Republic’s strong support for the oppressed Palestinians in the face of Trump’s so-called peace plan and the plots that aims to target Palestinians’ historical rights, saying that the “shameful deal of the century is dead on arrival and just as previous peace plans, it is doomed to fail".

Stressing that Iran’s policy of providing overwhelming support for the Palestinian resistance has not changed, particularly after the US assassination of top Iranian general, Qassem Soleimani, in Iraq, Qaani said, “We will stand with the Palestinian nation and the axis of resistance till the collapse of the US and Zionism.”

The Quds Force commander added, “American statesmen only seek to appease Zionist criminals and will spare no crime and act of treason to this end.”

Al-Nakhala added that the “Palestinian nation has no other option but resistance against this disgraceful deal.”

Ismail Haniyeh, head of the Political Bureau of Palestinian resistance movement, Hamas, said for his part that all “Palestinian groups are unanimous in their rejection of the despicable plan, the so-called deal of the century.

Haniyeh added that the Islamic Republic of Iran’s positions and approaches in support of the Palestinian resistance "will boost our morale and determination for the liberation of Palestine.”

Defying international outcry, Trump on Tuesday announced the general provisions of the plan at the White House with Israeli Prime Minister Benjamin Netanyahu at his side.

The scheme — which all Palestinian groups have unanimously rejected — largely meets Israel’s demands in the decades-old conflict, while creating a Palestinian state with limited control over its own security and borders.

It enshrines Jerusalem al-Quds as “Israel’s undivided capital” and allows the regime to annex settlements in the occupied West Bank and the Jordan Valley, among other controversial terms.

Palestinian leaders, who severed all ties with Washington in late 2017 after Trump recognized Jerusalem al-Quds as the capital of the Israeli regime, immediately rejected the plan, with President Mahmoud Abbas saying it “belongs to the dustbin of history.”

Thousands of Palestinians in the occupied West Bank and besieged Gaza Strip poured out onto the street in immediate condemnation of the plan.

Muslims all across the world have also expressed solidarity with the Palestinian cause and denounced the Trump's proposed plan.

On Thursday, Iranian President's Chief of Staff Mahmoud Vaezi slammed the so-called “Deal of the Century” as a clear violation of Palestinians’ rights, and said Tehran will stand by the people of the Arab country against the American-Israeli plot.

From the perspective of the Islamic Republic of Iran, the only solution to the Palestinian issue is to rely on the will and collective wisdom of inhabitants of that land [Palestine], Vaezi highlighted.

In a Thursday statement in response to Trump’s announcement of the plan, Iranian Supreme Leader's top adviser for international affairs Ali Akbar Velayati warned of the consequences of the so-called “Deal of the Century” plan, saying that it will further destabilize the region.

He referred to the Palestinian cause as “the most important” issue facing the Muslim world, saying Muslims are obliged to throw “unequivocal support” behind Palestine by “using all material, spiritual and media capacities, public diplomacy, holding rallies and enlightening public opinion.”

Velayati further warned of the repercussions of such a plan, including destabilizing the region and violating numerous UN resolutions on the Palestine case.

“The deal of the century will lead nowhere,” but rather consolidate unity in the Muslim Ummah and muster support for the oppressed Palestinian nation from the world’s freedom- and justice-seeking people and the entire international community, he said.

Late on Tuesday, the Iranian Foreign Ministry lashed out at Trump's so-called "Deal of the century" as a great betrayal to the causes of the Palestinians and all Muslim nations of the world, urging all Islamic countries to get united, regardless of differences and disagreements, to fight against the “treason of the century”.

"The Zionist regime is an occupying regime and the only solution to solve the Palestinian crisis is a referendum among all main residents of the Palestinian land and such vicious plans are doomed to failure," Iranian Foreign Ministry Spokesman Seyed Abbas Mousavi said.

He called on all free nations and governments in the region and across the world to counter Trump's disgraceful scheme.