IRGC Commander: Iran Has Now Access to All Codes of US MQ4 Drone 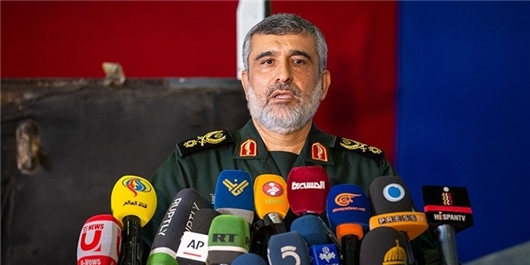 TEHRAN (FNA)- Commander of the Islamic Revolution Guards Corps Aerospace Force Brigadier General Amir Ali Hajizadeh warned the US not to use its MQ4 Triton drones against Iran as the IRGC now enjoys full familiarity with the codes and frequencies of that particular kind of drone.

“Americans should draw a redline for using this drone against Iran because we are now familiar with all its codes and frequencies; meaning that we can deactivate it not from a 100km distance, but from thousands of kilometers, away from Tehran,” General Hajizadeh said on Thursday night on the sidelines of unveiling the new retrieved parts of the MQ4 Triton which was downed by the IRGC back in June 2019.”

“We have the biggest collection of drones in the world. We lacked Triton that was added to the collection. And we will certainly target any other drone that would violate Iran’s territory,” the IRGC Aerospace Force commander added.

He noted that the MQ4 drone is invaluable, and said, “Each device that you see here is a treasure for us as they provide valuable information and we will use this information.”

The IRGC shot down a US Navy’s Northrop Grumman MQ4-C Triton drone that had entered Iranian airspace in the Gulf of Oman to gather intelligence on June 20, using indigenous Sevvom Khordad surface-to-air missile system.

General Hajizadeh said that his forces could have also shot down a US P8 aircraft with 35 on board which was violating Iran’s airspace, but decided to shoot down the drone to only send a message to Washington.

“We intended to send a message to American terrorists in the region,” General Hajizadeh said on June 21, adding that his forces had also traced a military P8 aircraft violating the airspace of Iran.

General Hajizadeh also stressed on June 22 that Iran was not after war but was fully ready to defend itself, adding that the fate of the downed US spy drone was waiting for any intruding flying object.

“The US measure was in violation of international law and we acted according to our legitimate responsibility,” General Hajizadeh said, adding, “It is possible that a US general or some operators were behind this American aggression, we don’t know that. But that measure (intruding into Iranian airspace) is a violation of international aviation rules by a spy drone which then received our natural response.”

“Borders are our red lines and any enemy which violates them will not go back home and will be annihilated. The only way for enemies is to respect Iran's territorial integrity and national interests,” the major general noted.