US Army Sends Equipment from Ein Al-Assad to Syria 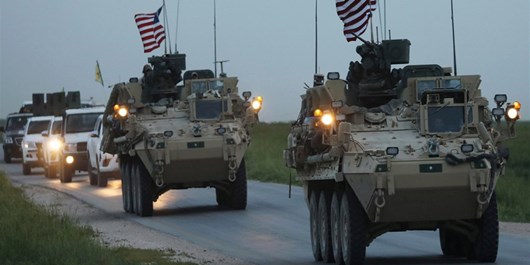 TEHRAN (FNA)- Arab media reports said on Wednesday that the US army has started dispatching major cargoes from Ein al-Assad base in al-Anbar province in Western Iraq to Syria.

The Arabic-language al-Mayadeen news website reported on Wednesday that a number of US trucks which carried construction materials have arrived in Syria from Ein al-Assad base in Iraq in the past four days.

The US has sent large amounts of equipment to Ein al-Assad recently after the IRGC's retaliatory missile strike against the base last month.

Ein Al-Assad, which houses US troops, is one of the largest and oldest military bases and located in Al-Anbar province in Western Iraq. It found itself under fire from volleys of ballistic missiles launched from Iran after a US drone strike near Baghdad on January 3 assassinated IRGC Qods Force Commander Lieutenant General Qassem Soleimani who played a major role in beating the Islamic State of Iraq and the Levant (ISIL, ISIS or Daesh) terror group in both Syria and Iraq.

The terror group has intensified its attacks in Iraq and Syria following the United States’ assassination of Iran’s top anti-terror commander, residents and monitors say. The Associated Press (AP) announced in an analysis that Daesh “clearly gained at least temporary breathing room” after tensions between Iran and the US escalated in the aftermath of the martyrdom of General Soleimani.