‘Winning’ or ‘Weakening’? Pompeo, Macron Divided over What Future Holds for West 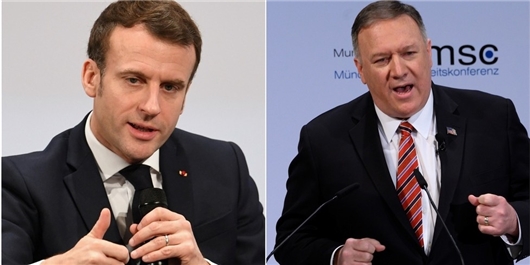 TEHRAN (FNA)- As the US secretary of state bragged about the successes of the West at the Munich Security Conference, the French president seemed rather skeptical, saying the Western world is no longer dominant.

“I’m happy to report that the death of the Transatlantic alliance is grossly exaggerated. The West is winning, we are collectively winning and we’re doing it together,” Mike Pompeo said at the Munich Security Conference this Saturday, making a veiled swipe at French President Emmanuel Macron’s famous “brain death” of NATO remarks, RT reported.

“Free” nations “are simply more successful than any other model that’s been tried in the history of civilizations”, he said, noting that migrants flee to Europe, not Cuba, and that people go to study “in Cambridge and not Caracas” while businesses are opened in Silicon Valley and not in St. Petersburg.

Speaking shortly after Pompeo, Macron used his time to shred the glossy picture of the world painted by the American diplomat.

Europe is “becoming a continent that doesn’t believe in its future”, he maintained, before offering a much less optimistic vision of the Western world.

"There is indeed a weakening of the West. 15 years ago, we thought our values were universal values, they will always rule the world, and we are dominant in terms of military technology and so on," he added.

But in today’s world, “values have changed” and new powers have emerged, Macron said, singling out China and Russia.

“I hear the defiance of all our partners, I'm not mad. But I know that being defiant and weak ... is not a policy, it's a completely inefficient system,” Macron insisted, stating that there is always “a second choice” – in this case, to resume dialogue with Moscow – “because today we talk less and less, conflicts multiply and we aren't able to resolve them”.

Risking the ire of Pompeo, the French president argued that Europe should cease being “the United States' junior partner”.

Europeans are slated to remain part of NATO, but nothing should stop them from being “sovereign, united and democratic and [acting] as such” in the coming decade, he offered.

Macron issued a similar appeal last year, when he insisted that the EU’s “strategic debate” with Moscow should be independent from NATO and the US.

“It needs to build [relations] only between Europe and Russia,” he pledged at the time.