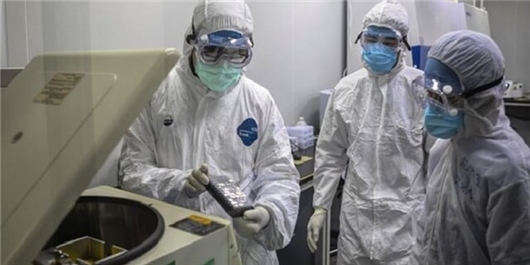 TEHRAN (FNA)- Iranian Health Ministry Spokesman Kianoush Jahanpour announced that his country has been able to treat many COVID-19 virus-infected people to stand 2nd after China.

“Based on the official data of the World Health Organization (WHO), Iran has been able to cure the highest number of coronavirus patients after China,” Jahanpour wrote on his twitter page on Sunday.

He said that 123 confirmed COVID-19 virus infection cases have recovered in Iran so far.

Jahanpour had announced on Saturday that the number of people diagnosed with infection to COVID-19 virus had increased to 593, adding that 43 patients had also died.

Reports from different cities and towns of Iran indicate strenuous efforts by the officials to help the coronavirus patients and prevent an epidemic.

Governor of Astara city in Northern Iran Hassan Rostamzadeh said that 20 out of 50 patients suspicious of coronavirus or flu have been cured and returned home, adding that no one in the city has died of the disease.

Meantime, the Iranian Students’ Basij (voluntary force) Organization announced activities of the organization in 24 provinces of Iran to help the health ministry in fight against coronavirus.

Also, the Iranian road organization declared that the health ministry’s representatives are present in most terminals which transfer passengers between the cities to screen the passengers, noting that all buses, minibuses and four-wheeled vehicles are sterilized before carrying passengers.

Meantime, the deputy commander of the Army for Training Affairs assured people that the soldiers are kept in isolated training centers and all health and hygiene measures have been adopted properly.

Also, Head of Iran’s Pasteur Institute Alireza Biglari said that the capacity to conduct coronavirus tests has increased over 10 times in the center.

Meantime, CEO of Barkat Foundation Amir Hossein Madani announced production of 60,000 protective clothings in one month for the physicians and nurses who are in direct contact with the patients infected with the coronavirus in hospitals.

According to the latest reports, coronavirus has caused over 2,900 deaths, while more than 85,000 people have been diagnosed with the illness across the globe.

The coronavirus is spreading in the Middle East, Europe and other parts of the world, as Brazil confirmed its first case in Latin America, while parts of China begin to lower their emergency response level as the number of new cases reported there continues to slow.

Washington state health officials said Saturday a person has died of COVID-19, the disease caused by the new coronavirus. It was the first reported coronavirus death in the United States.

The Iranian health ministry had said on Tuesday that over 700,000 sanitation packs, including equipment to prevent coronavirus-infection have been transferred to Qom province, the first place where the COVID 19-infection was diagnosed, and are being distributed among people.

As a preventive measure, Iranian authorities have ordered closure of educational and cultural institutions across the country as of Monday.

Tehran’s municipality announced that all the city’s public places, including the metro trains and buses, are being disinfected at the end of the line every hour as part of attempts to contain the spread of the virus.

Iran’s Foreign Ministry hosted a meeting on Wednesday to brief a WHO representative and the foreign ambassadors residing in Tehran on the latest preventive and therapeutic measures taken by the country to contain COVID-19, as the novel coronavirus is called.

In comments at the meeting, the WHO representative said Iran has the necessary fundamental capabilities to tackle the epidemic, and that Tehran’s performance has been as “successful and exemplary” in the region and the world.

The Iranian Health Ministry officials, who were also present at the meeting, reaffirmed Iran’s commitment to the international health regulations and standards.

Iran enjoys all the technical and specialized capabilities needed to battle the coronavirus, they stressed.