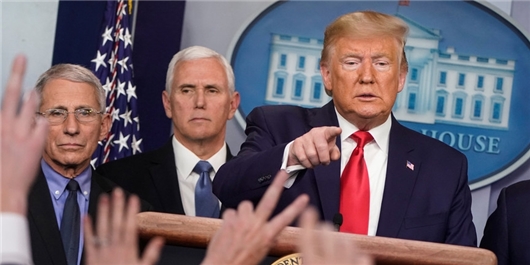 TEHRAN (FNA)- Alarm bells started to ring for health experts who try to inform the public of the outbreak of coronavirus in the United States, as Walter Shaub, the former Director of the Office of Government Ethics, disclosed that the administration of President Donald Trump has warned to punish anyone who leaks information on COVD-19 epidemic without White House approval.

Vice President Mike Pence has warned that all messages and data should go through his office.

Officials familiar with the strategy told The New York Times that the new approach would help streamline the administration’s public statements, some of which have been contradictory. The efforts will focus on getting officials on the same page for television appearances.

But, Shaub declared that violating the Trump administration’s new order could result in penalty such as “termination of a decades-long career in public service (and health insurance)”.

The White House has prohibited public health officials from releasing any information VPOTUS has not approved for release. The penalty for one of these experts violating such an order could include termination of a decades-long career in public service (and health insurance). https://t.co/81v4Ine7gT

If Trump says coronavirus is a "hoax" and has told public health officials not to say anything without Pence's approval, does he mean for the government to take no action other than to help us understand it's a "hoax"? Because you don't fight a pandemic that doesn't exist. https://t.co/pc01txNnEI

Pence has announced that Dr. Deborah Birx, who leads the US effort to combat HIV and AIDS, would be the coronavirus-response coordinator for the White House. Meanwhile, Health and Human Services Secretary Alex Azar is the chairman of the government’s coronavirus task force for the government broadly. Pence’s position has sparked some concerns that the administration will spin critical information about the virus.

Dr. Anthony Fauci, the Director of the National Institute of Allergy and Infectious Diseases, told associates he was ordered by the White House not to make any more statements about the coronavirus without first having them approved by the administration.

Two patients have died of the novel coronavirus in the United States, both in Washington State, so far. More confirmed cases of the illness have also emerged in the country - several with unknown origin which patients hadn’t recently traveled to high-risk countries or had any known close contact with a traveler or an infected person.

But, Trump has accused Democrats and the media of exaggerating the severity of the threat posed by the virus as he has repeatedly downplayed it and spread misleading information. The US leader had asserted that the coronavirus is “very much under control” in the United States.

A top US health official told lawmakers on Friday to expect many more coronavirus cases in the United States, as the administration of Trump faced mounting criticism for its response to the crisis.

The Centers for Disease Control and Prevention (CDC) has come under fire for faulty diagnostic tests that have prevented states from identifying potential patients with the disease. The agency on Friday announced it was providing states with additional test kits to speed up the process.

Experts have also raised concerns that a lack of testing means that the virus could be circulating in some areas undetected.

A senior official at the CDC had warned that the Spread of COVID-19 coronavirus in the US is not a matter of whether but when, and Americans need to prepare for their lives to be disrupted.

Lawmakers in both parties have expressed growing alarm that the threat of coronavirus in the United States is serious, and that the Trump administration is not doing enough to fight it.