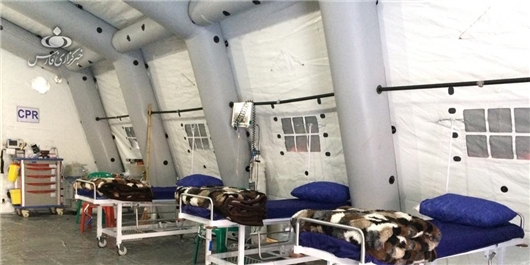 TEHRAN (FNA)- The Iranian Army on Wednesday launched a medical center with 2,000 beds at Tehran International Permanent Fairground special to the coronavirus patients who are recovering from the deadly disease.

Addressing the ceremony, General Heidari said that the Army has launched 27 hospitals and 4,750 hospital beds across the country so far, stressing readiness to prepare 8,000 others.

Also, Rear Admiral Sayyari said that the Army is well-prepared to thwart any threat thanks to combat capability.

Speaking on the sidelines of the ceremony to unveil the Army’s 2,000-bed hospital, he said that immediately after reports of the epidemic in China, the Iranian army health system took major steps to contain coronavirus in Iran.

The measures adopted by the Army include giving service to 32 hospitals and all clinics, providing 1,600 beds, launching 200 makeshift and normal monitoring centers, preparing over 4,575 beds for hospitals, screening and disinfecting cars, streets, public places and launching workshops for producing masks and disinfectants by using modern warfare systems, he said.

The coronavirus COVID-19 is affecting over 180 countries and territories around the world. The virus was first reported in the central Chinese city of Wuhan late last year. It has so far killed more than 19,200 people and infected over 428,000 others globally.

Iran reported on Wednesday that a total number of 2,077 coronavirus patients have died and 27,017 cases of infection have been identified in the country so far. Meanwhile, 9,625 people have also recovered.