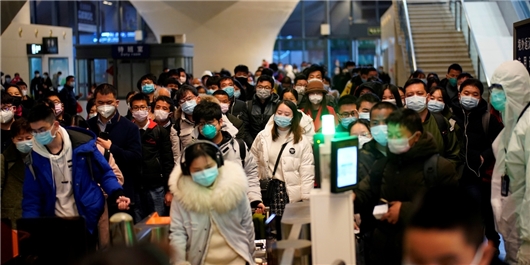 TEHRAN (FNA)- The metro in Wuhan, the city where the deadly Covid-19 virus is believed to have originated, opened its doors to 11 million residents after two months of lockdown.

On Saturday, several subway lines in Wuhan welcomed their first passengers after a 65-day hiatus brought about by the coronavirus outbreak, which has since spread to most of the planet, RT reported.

The number of those infected is nearing 600,000 worldwide.

Some 184 metro stations, equipped with thermal scanners, opened for commuters, who will still have to adhere to social distancing guidelines.

Wuhan has borne the brunt of the health crisis, with more than 50,000 people infected. However, the worst appears to be over. New cases countrywide have been brought to a near standstill, with no new locally-transmitted cases reported in mainland China on Friday. A total of 54 reported new cases all came from abroad.

Despite the promising developments, some travel restrictions will remain in place until April 8, when outbound trains and flights are set to be resumed.

Buses have already been roaming the streets of the Hubei provincial capital since Wednesday, as 117 routes recommenced their services.

Those who want to enter the city must show a green code on a mobile app, confirming that they have been cleared by health authorities, and have had no contact with suspected coronavirus patients or those who tested positive for the disease. The same rule would apply to those willing to leave Wuhan after April 8.

According to the official government tally, the total number of confirmed Covid-19 cases in China amounts to 81,394, with 3,295 of them resulting in fatalities.

In an effort to prevent a 'second wave' of the outbreak, China has been tightening restrictions on foreign arrivals, announcing on Thursday that national airlines will be allowed to maintain only one route to any country.

Beijing has also resumed its railway freight service between Wuhan and Europe by delivering medical aid to Germany as authorities work to lift strict quarantine measures after the number of new cases Covid-19 dropped.

A train loaded with medical supplies and construction materials has left a station in Wuhan, the capital city of China's central Hubei Province, and is set to arrive in the city of Duisburg in Germany in two weeks, Chinese outlet the Global Times reported on Saturday.

The delivery will be the first China-EU cargo freight operation from Wuhan since the city was placed under strict quarantine in January after the Covid-19 outbreak.