Health Minister Informs of Screening 90% of Iranians, Thanks People for Staying Home 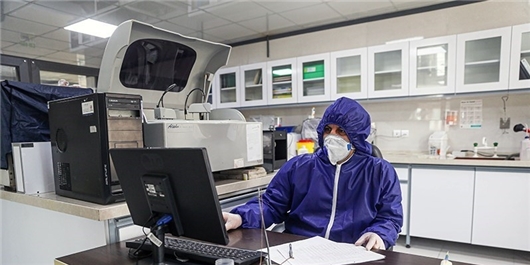 TEHRAN (FNA)- Iranian Health Minister Saeed Namaki appreciated people for staying home on the National Nature Day, and further announced that 90 percent of the target population have been screened within the National Mobilization Plan against the coronavirus.

"I deeply thank the Iranian people as they didn't go to the nature unlike previous years", Saeed Namaki said, and added, "Today we had a cyber-session with the authorities of the World Health Organization (WHO) in which they lauded Iran's activities in fighting coronavirus and requested to use Iran's experiences in the whole region."

"So far we have managed to cover more than 90 percent of the target population," the minister said.

"The reason why we say we have administered the first wave of the disease, while the number of cases has increased, is that we have promoted case-detection method and you will see the outcome of this measure when these people recover," he added.

"We are at the phase of administering the epidemic and have not yet entered the phase of controlling and containing the disease yet. However, in some provinces we have fewer infections than recoveries."

The coronavirus COVID-19 is affecting approximately all countries and territories around the world. The virus was first reported in the central Chinese city of Wuhan late last year. It has so far killed more than 48,000 people and infected over 950,000 others globally.

As for Iran, the Iranian health ministry announced on Thursday that 2,875 new cases of infection to COVID-19 virus have been identified in the country, adding that 3,160 patients have died so far.

“According to definite diagnostic standards, a sum of 2,875 new cases of infection to COVID-19 virus have been identified in Iran during the past 24 hours, increasing the number of infections to 50, 468,” Health Ministry Spokesman Kianoush Jahanpour said.

He added that fortunately, 16,711 patients infected with COVID-19 virus have also recovered and been discharged from hospital.

Jahanpour said that 124 coronavirus patients have passed away during the past 24 hours, noting that the death toll has increased to 3,160 so far.