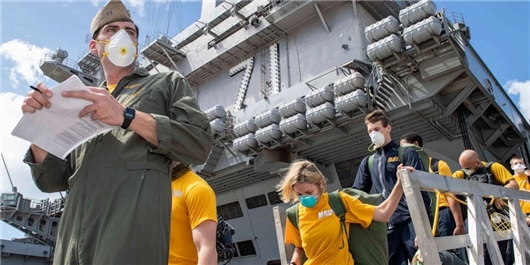 TEHRAN (FNA)- Eighteen sailors aboard a US Navy destroyer deployed near Central America have tested positive for the coronavirus, the military confirmed on Friday.

The Navy became aware of the outbreak aboard the USS Kidd after a sailor needed to be medically evacuated to a treatment facility in San Antonio, Texas, on Thursday, where he tested positive for COVID-19, the Navy said in a statement, The Hill reported.

Within 24 hours after the positive test, the Navy deployed an eight-person medical evaluation team to the ship to further test sailors aboard and to conduct contact tracing, working to isolate individuals believed to have been exposed to the virus.

“As of this morning, 17 additional Sailors have tested positive,” the statement added.

The Navy announced it expects additional cases onboard, and that the ship will return to port to be cleaned.

“The first patient transported is already improving and will self-isolate. We are taking every precaution to ensure we identify, isolate, and prevent any further spread onboard the ship,” Rear Adm. Don Gabrielson, commander of the US fourth fleet, said in the release, adding, “Our medical team continues coordinating with the ship and our focus is the safety and well-being of every Sailor.”

Top Pentagon Spokesman Jonathan Hoffman on Friday also confirmed the outbreak and said when the ship returns to port, a portion of the crew will be removed, adding that there is a “high level of attention to the issue from the Navy”.

The Kidd, which had been deployed to the Caribbean and the Eastern Pacific region, marks the second significant outbreak aboard a deployed Naval vessel.

The coronavirus outbreak aboard the USS Theodore Roosevelt in March garnered national attention after the ship’s former commander, Capt. Brett Crozier, wrote a letter imploring the Navy for help with the outbreak.

After the letter leaked to the media, Crozier was fired by then-acting Navy Secretary Thomas Modly, who later resigned after he gave a speech aboard the Roosevelt criticizing the captain.

The Navy has since tested the entire crew of the Roosevelt for the illness and 840 sailors have tested positive for the virus as of Thursday.

Navy officials have also moved 4,234 sailors of the 4,800-person crew ashore to Guam, where the Roosevelt is docked while the ship handles the outbreak.

The Navy has conducted an investigation into the situation on the Roosevelt, and top officials have not ruled out reinstating Crozier when it wraps. The investigation result's release is pending approval from Defense Secretary Mark Esper.

Hoffman told reporters on Friday that Esper will meet with the Chief of Naval Operations Adm. Michael Gilday the same day to discuss the results of the investigation.

Esper “is going into this with an open mind and he is generally inclined to support Navy leadership in their decisions ... once he is briefed we will see where that takes us”, Hoffman added.