Spokesman: US Repeated Mistakes to Face Harsher Response from Iran 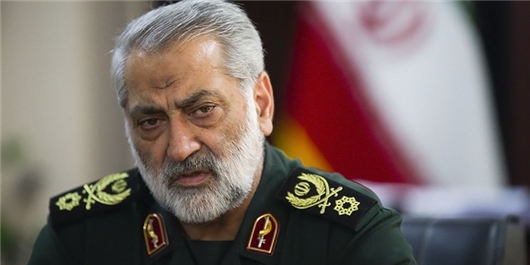 “The Americans have certainly experienced that if they make the slightest move and aggression against the Islamic Republic’s territorial waters and our people’s interests, they will be slapped in the face stronger than the past because we do not joke with anyone in defending our country,” General Shekarchi said in an interview with the state TV on Tuesday night.

General Shekarchi said that the regional states are themselves able to establish security in the region, and asked, “What are the Americans after in this region and what do their warships, fighters and combat units do in this region?”

Meantime, a prominent Iranian analyst said US President Donald Trump’s recent threats against the Iranian forces in the Persian Gulf have been raised based on his confidence in Pentagon's assessment of Iran’s threshold of tolerance, and warned that Trump might find himself in an unwanted war situation and lose the 2020 race.

He also explained in a Monday night interview with Al-Jazeera Arabic that the US Navy has gone on the offensive in the Persian Gulf to adopt rather new tactics to harrass Iran's civilian and military vessels in a move to provoke the Islamic Revolution Guards Corps Navy into action followed by a hype by the Western mainstream media to misrepresent the IRGC as the aggressive side that could risk the flow of supplies in the global oil lifeline to damag its reputation and make the Iranian force rather passive under pressure by the international community, specially the regional states.

"The Pentagon hopes to facilitate its missions and deploy further to the North towards Iranian waters after undermining the IRGCN's controlling power in the Strait of Hormuz," Khoshcheshm said, and added, "And at a later stage, it plans to push itself into the policing power to partner in the administration of security in the Strait in violation of international rules and regulations which entitle Iran to be the only country which can administer checks and control to protect security in the Strait of Hormuz since the Strait is in Iran's territorial waters."

"So, in a situation where any misfire could end up in war, the entire US plan entails a military-political game in full denial of international law that is very much based on the Pentagon's assessment of the Iranian military's threshold of tolerance, and the Pentagon has already proved to be incapable in this very aspect as was shown in two cases last year, namely the Global Hawk and the Ein Al-Assad attacks," the analyst stated.

“The US wrong assessment could entangle Trump in a dilemma to escape war and be called a coward commander-in-chief or lose voters' base for starting a new Middle-East war,” the analyst warned, saying that not just the Democrats, but also many others in the Republican camp would like very much to push Trump into such a warlike situation.

“Either way his re-election chances will be ruined. The US president is no stranger to this dilemma; despite tough words, he knows he needs to handle Pentagon 2017 Persian Gulf policy more delicately this year to avoid the risks of an incidental war,” Khoshcheshm concluded.

He further noted that a recent CNN report proves the veracity of the remarks made by Iranian Armed Forces Spokesman Brigadier General Shekarchi in response to the US president’s Persian Gulf threat to Iran and preciseness of Iran's military assessment of Pentagon's genuine capabilities.

Last Wednesday, General Shekarchi blasted Washington for threatening Iran, saying that the US should focus on saving its forces from coronavirus.

“Instead of bullying others today, Americans should put their efforts into saving their forces, who have contracted coronavirus,” General Shekarchi said in response to a recent threat by Trump.

Trump had said that he has instructed the US Navy to “shoot down and destroy” Iranian vessels if they harass American ships at sea.

General Shekarchi exemplified the Islamic Revolution Guards Corps (IRGC) and the Iranian volunteer forces at the forefront of the battle with covid-19, and called on the US to “evacuate” their forces from West Asia and use them to “rescue their people in the crisis”.

The comments by the Iranian commander came after the US Navy announced last Tuesday that it has detected 700 cases with coronavirus symptoms among the sailors of the USS Theodore Roosevelt aircraft carrier.

The IRGC last week strongly rejected the Pentagon's recent claims about the harassment of the US naval forces by the IRGC boats in the Persian Gulf as a "Hollywood" story, and further warned against the US Navy’s new “unprofessional and dangerous” moves in the waterway.

“In recent weeks, we have witnessed a repetition of the terrorist US Navy's unprofessional behavior in the Persian Gulf threatening security and tranquillity and posing new dangers to the region,” a statement by the IRGC Navy’s Public Relations Office said.

It added that in recent weeks, including on April 6 and April 7, the US warships in a dangerous move blocked the voyage of Iranian ship, Shahid Siavashi, on two separate occasions  in the region, but were forced to step back after the IRGC warnings and the professional and smart moves of the Iranian vessel.

The statement said that the IRGC Navy has increased its patrolling boats in the Persian Gulf "to stop the US forces' continued illegal, unprofessional, dangerous and even adventurist behavior".

In the same context and after declaring that it is conducting drills in the region and there is a threat of shoorting in the drill zone, a group of IRGC vessels, including 11 boats, on a mission to patrol the drill zone on April 15 confronted the US warships and "despite their unprofessional and provocative measures and disrespect for the warnings, forced them to evacuate the IRGC Navy vessels' sailing path with firm resistance and bravery".

It added that the US Fifth Fleet in the region has released an incorrect and biased reading of the incident which shows the Americans’ interest in Hollywood stories.

“We advise the Americans to respect the international rules and naval protocols in the Persian Gulf and the Sea of Oman rathern than adventurism, fake stories and lies," the IRGC statement said, and further warned that "the powerful IRGC Navy and Armed Forces of the Islamic Republic of Iran assess foreign forces' dangerous behaviors in the region as a threat to [Iran's] national security and a redline and will hence, give a crushing response to any such miscalculation”.

It reiterated that the illegitimate presence of the US in the region is a source of mischief and insecurity, and described the US withdrawal from West Asia as the only way to establish sustainable security in the strategic region.

The US fifth fleet had claimed that a group of eleven Iranian naval vessels harassed six US navy vessels in the Northern Persian Gulf for about an hour, with one coming within just ten yards of a Coast Guard cutter.

The "dangerous and provocative actions increased the risk of miscalculation and collision ... and were not in accordance with the obligation under international law to act with due regard for the safety of other vessels in the area," the fleet, which is based in Bahrain, claimed in a statement.