President Warns of US Plots against Iranian Nation 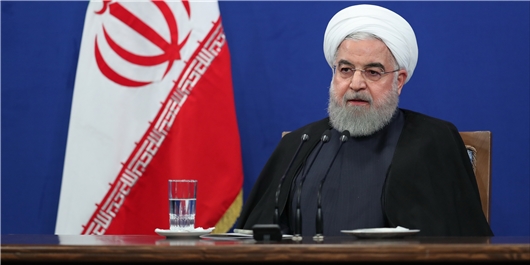 TEHRAN (FNA)- Iranian President Hassan Rouhani warned of Washington’s moves in the Persian Gulf, stressing that the country’s Armed Forces will not hesitate in safeguarding the Persian Gulf and Iran’s territories and interests.

“They should stop hatching plots against Iran,” he said.

President Rouhani said that the Iranian nation has always protected the Persian Gulf successfully and will continue its responsibility in the future, adding, “The Iranian military and law enforcement police forces have also succeeded in safeguarding the Persian Gulf.”

His remarks came after the US naval forces’ unprofessional and illegal moves in the Persian Gulf in the past few weeks and the American officials’ threats against Iran.

Last week, Trump said that he has instructed the US Navy to “shoot down and destroy” Iranian vessels if they harass American ships at sea.

Trump's message came after the US Navy announced last Tuesday that it has detected 700 cases with coronavirus symptoms among the sailors of the USS Theodore Roosevelt aircraft carrier.

The IRGC last week strongly rejected the Pentagon's recent claims about the harassment of the US naval forces by the IRGC boats in the Persian Gulf as a "Hollywood" story, and further warned against the US Navy’s new “unprofessional and dangerous” moves in the waterway.

“In recent weeks, we have witnessed a repetition of the terrorist US Navy's unprofessional behavior in the Persian Gulf threatening security and tranquillity and posing new dangers to the region,” a statement by the IRGC Navy’s Public Relations Office said.

It added that in recent weeks, including on April 6 and April 7, the US warships in a dangerous move blocked the voyage of Iranian ship, Shahid Siavashi, on two separate occasions  in the region, but were forced to step back after the IRGC warnings and the professional and smart moves of the Iranian vessel.

The statement said that the IRGC Navy has increased its patrolling boats in the Persian Gulf "to stop the US forces' continued illegal, unprofessional, dangerous and even adventurist behavior".

In the same context and after declaring that it is conducting drills in the region and there is a threat of shoorting in the drill zone, a group of IRGC vessels, including 11 boats, on a mission to patrol the drill zone on April 15 confronted the US warships and "despite their unprofessional and provocative measures and disrespect for the warnings, forced them to evacuate the IRGC Navy vessels' sailing path with firm resistance and bravery".

It added that the US Fifth Fleet in the region has released an incorrect and biased reading of the incident which shows the Americans’ interest in Hollywood stories.

“We advise the Americans to respect the international rules and naval protocols in the Persian Gulf and the Sea of Oman rathern than adventurism, fake stories and lies," the IRGC statement said, and further warned that "the powerful IRGC Navy and Armed Forces of the Islamic Republic of Iran assess foreign forces' dangerous behaviors in the region as a threat to [Iran's] national security and a redline and will hence, give a crushing response to any such miscalculation”.

It reiterated that the illegitimate presence of the US in the region is a source of mischief and insecurity, and described the US withdrawal from West Asia as the only way to establish sustainable security in the strategic region.

The US fifth fleet had claimed that a group of eleven Iranian naval vessels harassed six US navy vessels in the Northern Persian Gulf for about an hour, with one coming within just ten yards of a Coast Guard cutter.

The "dangerous and provocative actions increased the risk of miscalculation and collision ... and were not in accordance with the obligation under international law to act with due regard for the safety of other vessels in the area," the fleet, which is based in Bahrain, claimed in a statement.