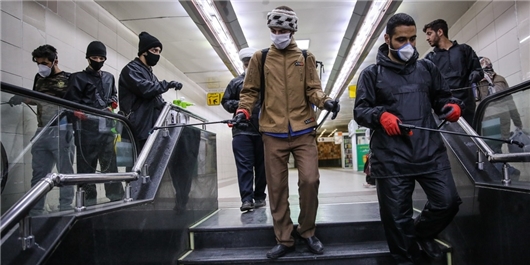 TEHRAN (FNA)- Head of Iran Nanotechnology Initiative Council (INIC) Saeed Sarkar said on Tuesday that the country’s researchers have produced a highly-efficient disinfecting solution which remains on the surface for 7 days to kill coronavirus and any other germs.

“Fortunately, at present, nearly 10 to 12 companies are producing nano-based disinfecting solutions which enjoy high durability and they remain on the surface from 12 hours to 7 days, depending on the company which produces them,” Sarkar told FNA.

He added that 200 tons of the nano-based disinfectants are produced in Iran every day.

Sarkar also announced the daily production of 250,000 N95 masks in Iran, noting that the country now enjoys the capacity to export the product to the European states.

“The European, neighboring and Southeast Asian states, including Indonesia, have demanded for our N95 masks and I hope that we can start exports of these masks to some of these countries,” Sarkar said.

Meantime, he referred to the production of special air purifier system which sterilizes the air by using the plasma technology and kills any floating bacteria or virus in the hospital or office environment.

The Iranian knowledge-based have actively produced different health and hygiene products to help fight against the coronavirus epidemic.

Iranian researchers managed to build a dry fog disinfecting system which increases the efficiency of efforts to sterilize different surfaces and areas against coronavirus.

“In the dry fog method, the turbojet engine of the device takes the air and makes it very dense and pushes it to the system’s nozzle. This process leads to the start of dry fog,” Babak Shahbazian, a researcher at Pardis Technology Park, said on Monday.

He added that the dry fog includes little drops of disinfectant with a diameter less than 5 microns which enables the user to sterilize the area and surfaces in the most effective way.

Shahbazian said that the little drops can even infiltrate hardly-accessed points, including inside the wardrobes and air conditioning systems’ channels.

In a relevant development, a knowledge-based company in Iran produced a home-made system which uses the Ultraviolet (UV) radiation to sterilize areas contaminated with coronavirus without any need to alcohol.

“The system uses radiation to disinfect the area instead of disinfecting gels and solutions and its sterilizing power is much more than ordinary systems which spray alcoholic liquids,” Sajjad Aqasizadeh, the CEO of Ajand Pajouhan Tous company, said on Sunday.

He added that due to the fact that the UV radiation harms the human body skin, the system is used to disinfect equipment and tools which cannot be sterilized by using disinfectants, including the telecommunication equipment, letters, etc.

Also, last month, another Iranian knowledge-based company managed to manufacture an ozone generator that can be used in the anti-coronavirus campaign.

The ozone generator device could be used to disinfect house, office, hospital, rooms, car, and the bed of a Corona patient as well as fruits and vegetables.

Ozone gas has also been used to fight fungi, bacteria, germs as well as SARS and influenza viruses.

East Asian countries have also used this method to fight the Coronavirus.

This Iranian knowledge-based company was able to indigenize the ozone generator device with 30 percent of the price of its similar foreign product.