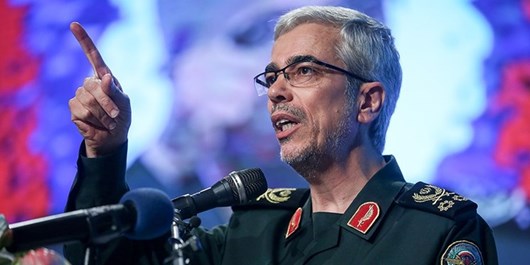 TEHRAN (FNA)- Chief of Staff of the Iranian Armed Forces Major General Mohammad Hossein Baqeri said that even the people living in Tel Aviv as well as the Israeli soldiers have felt the reality that Israel is coming to an end.

“The strategic depth of the Palestine-centered resistance’s discourse has weakened occupiers' resolve by its pervasive influence in the geography of Quds and the lands around it and these days, whispers of the end of usurper Israel is even heard in the streets and garrisons of Tel Aviv,” General Baqeri said in a message on Wednesday on the occasion of the International Quds Day (May 22).

He added that despite their media propaganda and spending trillions of dollars in the region, the Zionist regime and its supporter, the US, are no more able to speak of war against the Islamic Revolution, and their threats and anti-Iran sanctions have also proven fruitless.

General Baqeri also assured the Palestinian nation and their holy cause that the Iranian nation and Armed Forces will remain in the frontline of the united front against the Zionist regime and they will foil the Zionists and US plot called Deal of the Century, annexation of the West Bank and other modern and complicated plots.

The message was released a few days after Head of the Tehran bureau of the Islamic Jihad Movement of Palestine Nasser Abu Sharif praised General Soleimani for his strenuous efforts in line with the Palestinian cause to liberate Quds from Israeli occupation.

“General Soleimani’s ultimate goal was the holy Quds wherever he was. He thought of Quds when he was in Iraq or Syria. No matter which part of the Muslim lands he was, his ultimate objective was liberation of Quds,” Abu Sharif said, addressing a seminar in the Republic of Azerbaijan to commemorate the International Quds Day (May 22) via a video conference on Sunday.

He said that the Palestinian people enjoy the spirit of struggling and are always after liberation of their occupied lands and have never become tired of pursuing this cause.

Abu Sharif warned that if Muslims do not consider Quds as their compass, they will lose their path and unity among them will fade away.

General Soleimani played a key role in assisting the resistance forces in the region.

Head of the Research Center of the International Islamic Awareness Organization Hossein Akbari underlined that Israel was forced to change its war strategy from offensive to defensive mode after General Soleimani stood beside the resistance front’s leaders.

“Actually, martyr Soleimani was the initiator of a strategic move which forced Israel to change strategy from offensive to defensive,” Akbari said in an interview with Persian-language Sobh-e No on Saturday.

He explained that General Soleimani awakened many people in the Muslim world when he stood beside Secretary-General of Hezbollah resistance group in Lebanon and defeated Israel in 2006 while many imagined that the regime cannot be defeated.

“It was the first and biggest failure of Israel,” Akbari said, adding that it was followed by the regime’s second defeat during the 22-day war against Gaza.

“Martyr Soleimani's command ran through the Palestinian resistance in a unique way and defeated Israel in the territories occupied by the regime,” he underlined.

Akbari said that after all these defeats, the Syria war was ignited and the US and its allies attempted to establish security for Israel but General Soleimani’s advice to the Syrian army commanders defeated them again.

General Soleimani had before his martyrdom in January 2020, in an interview disclosed some untold facts about the 2006 Israel–Hezbollah 33-day War.

“I should say that the 33-day war had some hidden causes which were the principle factors leading to the war. The war had some apparent and some hidden causes, the pretext of which were the hidden goals that the [Zionist] regime sought for a period of time. When I say there were hidden causes, we had some information about the preparations of the Zionist regime, but we had no information on the fact that the enemy wanted to launch an attack in ambush. Later, based on two circumstances, we concluded that prior to this war, a swift ambush was supposed to be conducted to overturn Hezbollah. Well, this war happened when two important events, one concerning the entire region and another exclusively concerning the Zionist regime were taking place,” he said in 2019 in an interview with Khamenei.ir website.

He said that Tel Aviv was using the opportunity of the presence of US military forces in the region to uproot Hezbollah from Southern Lebanon, adding that some Arab countries were also collaborating with the Israeli-American plot.