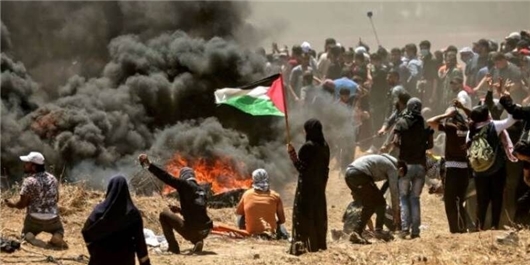 TEHRAN (FNA)- Lebanese political analyst and university professor Marweh Osman said that the so-called ‘Deal of the Century’ is illegitimate as it violates international rules and helps the Zionist regime to complete its dominance over Palestinian security and lands.

Speaking  to FNA, she said, “When US President Donald Trump unveiled the Deal of the Century upon the initiative of his son-in-law, Jared Kushner, Palestinians opposed it vehemently.”

She added, “This plan is basically different from the plans of the previous US administrations that were dubbed as ‘Middle East Peace Process. The most important difference is that this plan has been based on economy, while the previous ones were all political.”

Commentiing some Persian Gulf Arab states' unofficially ties with Tel Aviv as Netanyahu pretends that Arab states like to have relations with him, Marweh Osman said that Saudi Arabia and a few Persian Gulf littoral states have been committed to give financial aid to Trump’s plan. She added that this has been mentioned in some Israeli and American dailies and, “even Jared Kushner has said that some of the regional states will help the plan financially to steal the remaining lands of Palestine."

The Lebanese analyst stated that according to the Israeli paper Maariv, the Deal of the Century, which is worth $50 billion, will be applied for economic developments in Gaza Strip, West Bank, Jordan, Lebanon and Egypt. This Israeli daily also wrote that Saudi Arabia and other Persian Gulf littoral states have been obligated to pay the prices.

Elsewhere in her remarks, the Lebanese professor said that the Deal of the Century will not stop by condemnation and reprimanding“ as it requires action in opposition.

Palestinians are now faced with an illogical Trump. This is a tough condition and a real threat…. Anyway, Palestinians shouldn’t be scared of confrontation. Powerful and armed resistance is the response.”