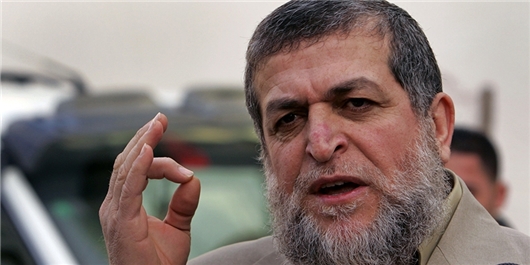 TEHRAN (FNA)- Member of the Islamic Jihad Nafez Azzam said the International Quds Day reminds nations of Palestinians' pains and sufferings, and appreciated Iran for standing by Palestinians despite sanctions.

Azzam noted Iran has spared no efforts to support Palestinians, saying, “Since the first day of the victory of the Islamic Revolution, Iran has taken a brave and respectful stance towards Palestine and its aspirations.”

He said the coincidence of Quds Day with the last Friday of the Holy month of Ramadan shows the Islamic Ummah's attention to Palestine.

International Quds Day conveys the message that the Palestinian aspiration is alive for Islamic Ummah and will never die, he added.

Earlier on Friday, Commander of the Tehran division of the Islamic Revolution Guards Corps (IRGC) General Mohammad Reza Yazdi said Zionists should know that Iran will support expansion of Jihad on Palestinian lands.

“Our youths have been enrolling in martyrdom-seeking battalions and are ready to encounter cowardly and child-killer Zionist soldiers,” general Yazdi said.

Referring to the Supreme Leader Ayatollah Khamenei’s speech on Friday about the cause of Palestine, Yazdi said, “The world and Muslim people should know that trust in the Arab government and the American-Zionist coalition cannot solve the problem of Palestine.”

He added that the Zionist regime has a lot of memories of the confrontation of Tehran division of IRGC for the past 40 years.

He reiterated, “Just as we strive to uproot the ominous coronavirus, we have put on the agenda the Jihad for eradication of the virus of Zionism.”

The commander stressed that Iranian youths, following the role models of Martyr Ahmad Motavasselian, Martyr Soleimani and Martyr Abu Mahdi al-Muhandis, are trying to materialize liberation of Quds and the entire Palestinian lands.

Measwhile, Supreme Leader of the Islamic Revolution Ayatollah Seyed Ali Khamenei said that the Zionist Virus as the record holder of human evil will soon be eliminated like the coronavirus.

Addressing the worldwide Muslims in a live televised speech on the occasion of the International al-Quds Day on Friday, Ayatollah Khamenei considered the dawn of the Islamic Revolution in Iran and the subsequent emergence of the Resistance Front to be factors that have impeded the "Zionist virus".

Also on Friday, Iran’s Judiciary Chief Ebrahim Rayeesi called on the Muslim countries to join in a collective effort to help retain the rights of the oppressed Palestinian nation.

Rayeesi made the remarks in a message to the heads of judiciaries of the Islamic countries on the occasion of the International Quds Day.

"Resistance is the initiative of the Palestinian people to continue their existence," Iran's judiciary chief said.

Rayeesi voiced the Iranian Judiciary’s readiness to pursue the realization of this goal and to address the crimes and aggression of Israel in national and international legal tribune with the cooperation of the Islamic countries.

Referring to the seven decades of support by the US and some European countries for the Israeli regime’s barbaric crimes, the Iranian judiciary chief underlined that the "right to self-determination" is an undeniable right of every nation.