IRGC Commander: Iran Not to Bow to Enemies 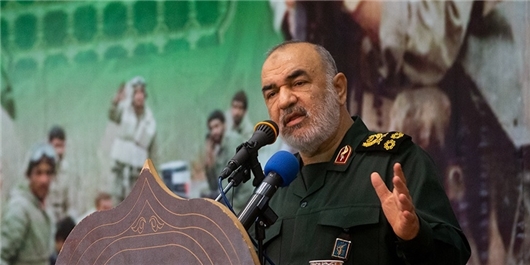 General Salami made the remarks, addressing a ceremony to deliver over 100 speed boats to the IRGC Navy in the Persian Gulf on Thursday.

He hailed Iran’s significant progress in the defense sector, warning that the Islamic Republic will give crushing response to enemies if threatened.

“The Islamic Republic has the determination. We will not bow to enemies. We will not retreat. Progress is the nature of our work. Defense is our logic in war but not in the sense of passivity against the enemy. Our operations and tactics are offensive and we have shown it in the battlefield,” General Salami said.

The IRGC commander said that a key portion of Iran’s maritime power is still “unknown” to others.

“The most important and dangerous part of this power is unknown. Our enemies will see this power the day when they pursue an evil intention against this land. On that day, they will get to see the real firepower of our forces at the sea and in the sky, and the battlefield will turn into a hell for the enemies of Iran and Islam,” he warned.

The IRGC Navy was equipped with over 100 home-made missile-launching speed boats on Thursday.

Enjoying hydrodynamic functional features, the boats are capable of sailing at a high speed, with a low radar cross-section (RCS) and a high level of offensive power.