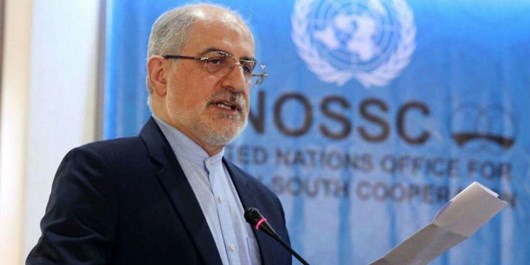 "Venezuela has demanded for help in repairing some of its installations and their demands are under study," Ansari said.

He did not specify the type of the stated facilities, but the Latin American country had earlier asked for Iran's help in repairing its oil installations.

He also said that the last Iranian oil tanker which carried fuel to Venezuela will arrive in the Latin American country's territorial waters on Sunday.

The fourth ship of Iran's fuel-carrying flotilla berthed at Venezuela's port on Friday morning as an indicative of the resolve of two independent Iranian and Venezuelan nations to pursue the right to free shipment.

The fourth of the Iranian flotilla, carrying gasoline and related products to Venezuela, successfully anchored in a Venezuelan port in the morning of May 29.

According to a report by Marine Traffic website which tracks the traffic of tankers in the international water, Faxon tanker entered Venezuela's special economic zone on Thursday morning.

Iran has sent five tankers loaded with 1.53 million barrels of gasoline and alkylate to Venezuela to help jump start the oil refineries in the Latin American state amid a fuel crisis.

Three of the vessels, Fortune, Forest and Petunia, have already reached Venezuela under military escort.

The fourth tanker Faxon arrived in the Caribbean Sea on Wednesday and in Venezuela's special economic zone on Thursday while the last ship, Clavel, is en route to Venezuela.

A US official said earlier this month that President Donald Trump’s administration was considering responses, prompting Tehran to warn of retaliatory measures if Washington causes any problem for the tankers.

Last week, President Rouhani said his country is always entitled to defend its sovereignty and territorial integrity, and warned that if his country's oil tankers in the Caribbean or anywhere in the world get into trouble by the Americans, Tehran will definitely retaliate.

“Although some of the US measures have created unacceptable conditions in different parts of the world, we will not be the initiator of tension and clash,” Rouhani said in a phone call with the Qatari Emir, Sheikh Tamim bin Hamad Al Thani.

He made it clear, “As before, we stress that the security of our region, particularly the marine security, is maintained by the regional countries and we have always announced that we are ready for cooperation with the neighboring countries.”

The Qatari Emir, for his part, underlined that the regional security should be maintained by the countries in the region and they should cooperate with each other to secure waterways in the region.

Hamad Al Thani also added that his country will try to deescalate tension.

Also, Chief of Staff of the Iranian Armed Forces Major General Mohammad Hossein Bagheri last week warned Washington of the dire repercussions of any hostile move against Iran's interests, vowing that Tehran would not hesitate to strike back in case it is targeted by the US.

Bagheri noted Iran’s right to free shipment in the high seas, and stressed that the armed forces are constantly monitoring every small move of the enemies, including the adventurous, terrorist and antihuman American army in the region and faraway lands.

"We stand firm and decided to give the US an appropriate response for any miscalculation against the national interests of Iran," the top commander stressed, in a stern warning to the US to avoid any hostile move against five Iranian tankers carrying fuel to Venezuela.

Venezuela's defense minister said last Wednesday that planes and ships from the nation's armed forces will escort Iranian tankers arriving with fuel to the gasoline-starved country to prevent any US aggression.

He compared the fuel tankers to humanitarian aid that China and Russia have sent to help Venezuela combat the new coronavirus pandemic.

Meantime, Iranian Defense Minister Brigadier General Amir Hatami warned the US against any hostile move or trouble-making for the country’s oil tankers in international waters.

“Troubling the oil tankers is a violation of international laws and security. Both international organizations and countries which are sensitive to the laws and waterways’ security should certainly show reaction to such an act,” General Hatami told reporters after a cabinet meeting in Tehran last week.