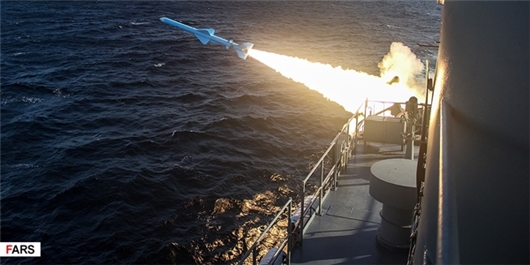 TEHRAN (FNA)- The Iranian Naval forces successfully fired several home-made cruise missiles during military drills in the waters of the Indian Ocean and the Sea of Oman.

The Iranian Navy announced in a statement on Thursday that it has successfully test-launched short-range and long-range missiles in military exercises in the Southern waters of the country.

During military wargames dubbed as ‘the brave martyrs of Ramadan’ in the North of the Indian Ocean and Sea of Oman on Thursday, the Navy test-fired short-range and long-range naval cruise missiles, the statement said.

It added that coast-to-sea and sea-to-sea missiles, with different ranges, were simultaneously fired from the coastline and Navy vessels and hit the target with high precision.

The missiles destroyed the target from 280km away while the range can be enhanced, the statement said.

The exercises, carried out for the first time with this composition, has been ‘more sophisticated’ and ‘more difficult’ than earlier drills, it added.

The missiles used in the drills have been designed and produced by the Iranian Defense Ministry in cooperation with the Navy.

Deputy Commander of Iran's Army for Coordination Rear Admiral Habibollah Sayyari described development of the missiles as a “promising step in enhancing defense and deterrence power”.

Iran continues the path of self-sufficiency in the defense sector by relying on its own experts despite all cruel sanctions, he said, terming the successful test-fire of the long-range cruise missile a “sign of significant progress in increasing synergy between armed forces and defense industry”.

Meanwhile, Iranian Navy Commander Rear Admiral Hossein Khanzadi said that “obtaining this new domestic achievement by the Iranian youth shows Iran’s upper hand in confronting any threat against people and the establishment and also it has enhanced the self-confidence of the armed forces”.

In relevant remarks in April, Commander of the Islamic Revolution Guards Corps (IRGC) Navy Rear Admiral Alireza Tangsiri said that Iran has increased the range of its naval missiles to 700 kilometers.

“Once the farthest range of our naval missiles did not exceed 45 km and even that was reached with the help of American military advisors,” Rear Admiral Tangsiri said.

“However, we have developed subsurface and surface-to-surface missiles with a range of 700 kilometers, which have been totally made by domestic military experts,” he added.