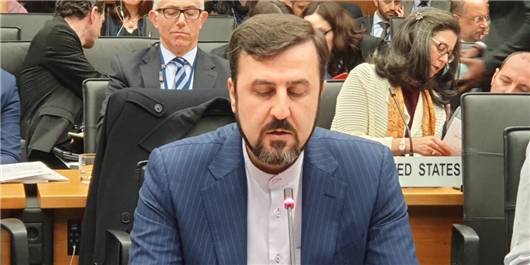 TEHRAN (FNA)- Iranian Ambassador and Permanent Representative to Vienna-Based International Organizations Kazzem Qaribabadi voiced Tehran's strong opposition to the adoption of the proposed resolution of the three European countries (the UK, France and Germany) in the Board of Governors of the International Atomic Energy Agency (IAEA) on Friday.

"The adoption of this resolution in the Board of Governors with the aim of requesting Iran's cooperation with the IAEA and ignoring the existing cooperation, is deeply disappointing and unfortunate," Qaribabadi said on Friday addressing the last day of the quarterly meeting of the IAEA's Board of Governors in Vienna.

"I would like to put on record the position of the Islamic Republic of Iran on the resolution just adopted," he added.

Qaribabadi reiterated that at the outset, "I would like to sincerely appreciate Russia, China, Azerbaijan, India, Mongolia, Niger, Pakistan, South Africa and Thailand for not supporting the Resolution, specially Russia and China for all their efforts in objecting this unconstructive path".

He further said that considering the extensive level of constructive cooperation between Iran and the Agency and simply overlooking this level of cooperation, adoption of this resolution aimed at requesting Iran to cooperate with the Agency is deeply disappointing.

The Iranian envoy said that it is also a deep regret that this resolution was presented by the three European States which have not taken any concrete practical step in the implementation of their obligations under the JCPOA, adding, "These lacks of willingness or inability to take practical actions in this regard, along with the unilateral, illegal and destructive measures by the US caused the future of the JCPOA to remain gloomy."

"Our advice to the E2+1 States is that if they cannot do something to save the deal, they can at least avoid making the situation more complicated and difficult! Paradoxically, your lack of action was needed here, which it seems that you couldn’t even do this," he added.

Qaribabadi further said that it is noteworthy that "we consider the current state of affairs as a trap set by the US and Israeli regimes, who in the past two years, not only spared no efforts to destroy the JCPOA, but also used all tools of pressure on the Agency, including through presentation of such baseless allegations, to deflect the ongoing appropriate course of cooperation and divert the attention from their non-compliance with their relevant international obligations, or being stayed out of the most important international instruments on disarmament and arms control."

He pointed out that saying that this resolution is required for strengthening of the Agency’s safeguards system proves how inconsistent are the behavior and actions of the Secretariat and the main sponsors of the resolution, and said, "If one really wants to maintain and strengthen the safeguards and verification regime, it is advised to take a professional and impartial approach."

He underlined that the fact that on the one hand the Safeguards Implementation Report for 2019 and the DG’s report on the status of implementation of safeguards during COVID-19 indicate that there are a number of safeguards related difficulties in several States, and on the other hand, the Secretariat and the PMOs, specially the Board, opted to keep their eyes closed over these difficulties, specially "the nuclear activities of Saudi Arabia and the regime of Israel, who are not even allowing the Agency to do the required inspection, should be considered as a concern".

"I would also like to put on record that the Islamic Republic of Iran is applying the Additional Protocol voluntarily and provisionally due to its political commitment under the JCPOA, and since it is not yet adopted officially through its national legislative procedures, Iran does not consider it as a legal obligation," Qaribabadi said.

The Iranian ambassador further underlined that adoption of this resolution will neither encourage Iran to grant access to the Agency based on fabricated and unfounded allegations, nor will it force Iran to come down from its principal positions.

"Iran categorically deplores this resolution and will take appropriate action in response, the repercussions of which would be upon the sponsors of this resolution," he added.

Qaribabadi said that finally, Iran does also have a solemn advice to the Secretariat of the Agency to: adhere to the limits of your authorities; acknowledge the cooperation between Iran and Agency; carry out your mandate in a professional, independent and impartial manner; do not pave the way for manipulation of issues for those with political agendas through taking positions and reporting hastily; behave in a way not to be blamed for the obliteration of the last bastion of multilateralism in Vienna and the destruction of the JCPOA.

The E3 drafted, US supported the resolution on Iran at IAEA the board passed 25 in favor, 2 against and with 7 abstentions, wall street journal reported.

The resolution calls out Iran over non-cooperation with the IAEA probe. First resolution since 2012 calling out Iran.

A Wall Street Journal correspondent noted in  a tweet, "Just as vote result comes in, UK says E3 foreign mins to meet Friday to discuss Iran, China."Talks will focus on the importance of finding a diplomatic solution to de-escalate tensions, holding Iran to account for its destabilizing regional activity, & keeping the door open..."

In relevant remarks on Thursday, Iranian Foreign Minister Mohammad Javad Zarif urged the IAEA Board of Governors not to let the enemies of the Joint Comprehensive Plan of Action (JCPOA) endanger Iran's interests, and said the three European countries (the UK, France and Germany) should not become their accessory.

The Iranian foreign minister said that "E3 should not be an accessory, after failing own JCPOA duties."

"We've nothing to hide. More inspections in Iran over last 5 yrs than in IAEA history," he noted.

"An agreeable solution is possible, but Res will ruin it," Zarif reiterated.

In relevant remarks on Tuesday addressing a joint press conference with his Russian counterpart Sergei Lavrov, Zarif said we will not let the IAEA to become a tool for ending Iran nuclear deal known as the JCPOA.

"We will not let Iran be subject to investigation the documents of which are based on spying claims," he noted.

Iran will give a suitable response if the IAEA wants to take advantage of illogical ways, Zarif reiterated.

Top Iranian diplomat said it will be regretful for the UN Secretariat and the IAEA if they tend to move in line with killing the JCPOA.

In relevant remarks on Thursday, Iranian President's Chief of Staff Mahmoud Vaezi censured Britain, France and Germany for collaboration with the US in its attempts against Iran at the IAEA.

Instead of expressing unfounded concern and encouraging the IAEA to surrender to the US pressures and continue its political and discriminatory approach towards Iran, the European Troika should uphold JCPOA commitments which are remaining on paper, Vaezi wrote on his twitter page on Wednesday.

His comments came after the western media claimed that the three European members of 2015 nuclear deal have prepared a resolution which calls on Iran to increase cooperation with the IAEA.