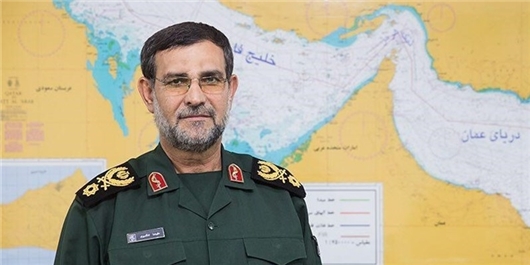 TEHRAN (FNA)- Commander of the Islamic Revolution Guards Corps (IRGC) Navy Rear Admiral Alireza Tangsiri underlined that the Persian Gulf belongs to the regional states, and the foreign forces should leave the region.

"The Iranian Armed Forces enjoy unrivaled power and superiority over enemies in the Persian Gulf, yet we believe that we have the message of peace and friendship to the Muslim Persian Gulf states and we can together establish brotherhood, peace and security in the Persian Gulf," Rear Admiral Tangsiri said, addressing a ceremony in the Northern city of Chalous on Sunday.

He noted that Iran has not made an aggression against any country in the past 41 years after the Islamic Revolution and is ready to help any oppressed nations, and stressed, "The presence of foreigners in the region is meaningless and they should leave the region."

"The Persian Gulf is our and the neighboring states' home and the foreigners who are after stirring tension and clashes should leave the Persian Gulf," Rear Admiral Tangsiri said.

In relevant remarks late in April, Supreme Leader of the Islamic Revolution Ayatollah Seyed Ali Khamenei underlined that the littoral states and not the foreigners are responsible for the establishment of security in the Persian Gulf.

In a series of tweets published on the Twitter page of Ayatollah Khamenei, the Leader also said that the Persian Gulf belongs to the nations living there, and those are the ones responsible for ensuring its security.

“Iran with its long coastlines has a key role in keeping the security of this region. By God’s grace we will do our part. This is our historical, geographical and regional duty,” said one the tweets, which were posted on the occasion of the National Persian Gulf Day.

“The Persian Gulf belongs to the nations living there. Its security is the duty of these nations, and Iran with its long coastlines has a key role in keeping the security of this region. By God’s grace we will do our part. This is our historical, geographical and regional duty,” the tweet said.

The Leader also said that a “wise and rational collective policy” in favor of the people of the region cannot be achieved while foreign forces are present in the Persian Gulf.

“The Persian Gulf region can be managed by a wise and rational collective policy that benefits all Persian Gulf countries. The factor that threatens such a proper, wise move is the presence of foreign forces in the region,” another tweet said.

“The Persian Gulf is our home and the place for the presence of the great Iranian Nation. The shores of the Persian Gulf and much of the Gulf of Oman, belong to this nation, and it should be present there. It should demonstrate its power. We’re a powerful nation with a great history,” it added.