Those Behind Yemen Blockade Must Be Held to Account 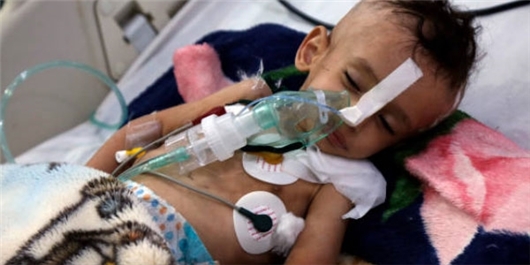 TEHRAN (FNA)- The ongoing blockade on Yemen imposed by the US, Saudi Arabia and their partners in crime, in the midst of a coronavirus pandemic, has left civilians without medicine, food and clean water, exacerbating the famine and cholera epidemic that have developed there in recent months.

International aid agencies are appalled by the global community's complacency regarding the health and humanitarian crisis unfolding in Yemen. They have called for a resolution to the unjustified conflict that has gone on for over five years now - while in its own statement, Amnesty International has called for an end to complicity in the conflict from the US and NATO.

The choice is between resolution or complicity in the suffering; there is no third option. The US, the UK, and others must immediately cease supplying arms to the Saudi Arabia-led coalition fighting in Yemen, which is impeding humanitarian assistance of items indispensable to the survival of civilians. The international community must break its shameful silence and use all possible means to lift the blockade.

The pandemic is claiming more lives now and the international community must break its shameful silence and use all possible means to lift the blockade. Every day the illegal blockade lasts means thousands of Yemenis will suffer from hunger and preventable diseases. Many could die in the historic outbreak if the blockade continues indefinitely.

As warned by the World Health Organization, UNICEF, and World Food Program, “the clock is ticking and stocks of medical, food, and other humanitarian supplies are already running low”. The cost of this blockade is being measured in the number of lives that are lost. The US is part of this coalition. The bombing campaign that has caused the cholera outbreak could not happen without the US.

By sending arms to Saudi Arabia, knowing that they are used to kill civilians, the US government and NATO allies are complicit in violations of international law, including war crimes. The US is the world's top arms exporter and Saudi Arabia is its top customer.

Under President Donald Trump, rhetoric on the US side has turned bombastic in terms of support for Saudi Arabia. He signed a $110 billion arms package, meaning, his administration doesn't seem concerned about human rights violations or civilian casualties in Yemen. Trump is basically telling the Saudi-led coalition to continue what it is doing amid the outbreak.

Amnesty and other human rights organizations continue to push for the UN to take actions against arms sales, but there is really no response or appetite there. It is past time for the world body to move in the right direction. The long suffering people of Yemen would like to see increased involvement by the UN in Yemen, which also includes exerting pressure on the Saudi-led coalition to lift the blockade and end the war.

As per international law and international humanitarian law, and the UN Charter, there is a reasonable and legal basis to believe that war crimes and crimes against humanity have been committed in connection with the armed conflict in Yemen. It’s a historic moment for the International Criminal Court in The Hague to commence an investigation that will focus on US military and NATO leaders.

The war crimes by the US and NATO allies are not the abuses and crimes of a few isolated cases, but rather are part of approved official policies in an attempt to force a sovereign nation into submission. There is irrefutable evidence to conclude that crimes have been committed in the furtherance of these colonial policies which would support US objectives in the ongoing war on Yemen - the poorest nation in the Arab world.

Under the Rome Statute, the ICC can and must take jurisdiction over a nationals of even a non-party state like the US and NATO if they commit a crime in a state party's territory. The US and NATO vehemently object to this, but it's nothing new.

Under principles of international law, the crimes being prosecuted in the ICC - genocide, war crimes, crimes against humanity - are crimes of universal jurisdiction. The world is watching for the ICC’s next step.