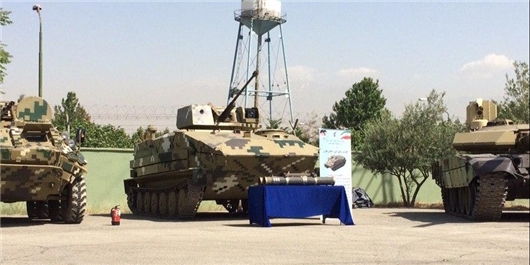 One of the military equipment unveiled today was the amphibious armored vehicle, Makran which is an efficient carrier equipped with a fire control system and a vision site, including a day camera and thermal sensor with a detection power of up to 4,000 meters and a laser rangefinder of 10 km.

Monitoring and shooting with a monitor, fast loading of ammunition, etc. are other features of this personnel carrier.

Another equipment unveiled by the IRGC Ground Force was Me'raj reconnaissance drone that uses elevator camera technology, enjoys a flight duration of more than 10 hours and has a range of 1,000km.

Other equipment produced and unveiled by the IRGC Ground Force included modernized BTR-60 personnel carrier, Ra'ad 2 tower which can be mounted on military vehicles, Explorer 1 which is a radar and electro-optic system which can be used to discover mines, offensive gun named Sa'aban with a range of 800 meters and Hedayat 22 system to precisely guide Katyusha rockets.

The Iranian Armed Forces test and use most of their military products during different drills to increase their preparedness.

Commander of the IRGC Ground Force Brigadier General Mohammad Pakpour said terrorists have been removed from regions West of Iran during his forces' recent successful anti-terrorism drills in Kurdistan province.

"The regions in which the terrorists were present were cleansed successfully," General Pakpour said on Wednesday.

"Firm confrontation against the terrorists and terrorist grouplets is  always on the agenda of the IRGC Ground Force and we will confront the terrorists mightily wherever they are," he added.

"We warn the terrorists and their allies that they will face the iron fist and firm reaction of the IRGC Ground Force in case of any mischief at the borders, specially in the Northwestern and Southeastern parts of Iran."

The exercises had kicked off on Tuesday.

"The drills zone stretches to the borders of Iraqi Kurdistan region as some terrorists might be present in this geography and one of the most important goals of the wargames is cleansing these regions from the terrorists," General Pakpour had said on Tuesday.

He noted that similar operations in the past few years were also aimed at cleansing the terrorists and outlaws from the region, and added, "Actually, the anti-revolutionary forces and their supporters have understood that Iran is fully serious about protecting security of the country and the nation and we attack any point in which the terrorists are stationed."

"We will firmly respond to any move by the terrorists in the current year too," General Pakpour said, elaborating on his force's agenda.

He also asked the officials of the Iraqi Kurdistan region and Iraqi government to adopt more actions to earn control over the terrorists to prevent them from using these regions as launchpad for cross-border attacks on Iran.