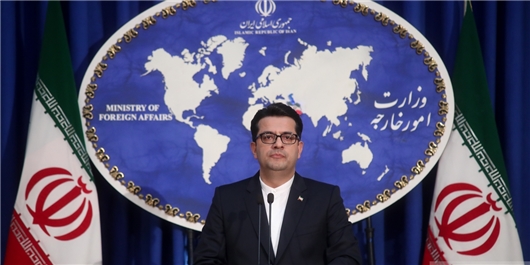 TEHRAN (FNA)- Iranian Foreign Ministry Spokesman Seyed Abbas Mousavi said that the US will not be able to win a consensus at the UN Security Council to extend the arms embargoes against Iran.

"As we have stated, the Americans are neither entitled nor able to take such a measure. They are not in a position to raise any claim and cannot refer to Resolution 2231 to annihilate the nuclear deal's achievements and contents after all their disloyalties and destructive measures against the nuclear deal and the resolution," Mousavi told reporters in a press conference in Tehran on Monday.

He said that other members of the UNSC are opposed to the US move and have denounced its measures.

"We foresee another failure for the US in this arena. We advise them not to test what they have tested before and not to pave a way which leads to a deadend," Mousavi said.

The arms embargo on Iran restricts Iran’s ability to obtain and transfer weapons and expires in October. The expiration is part of the 2015 Iran nuclear deal that the United States walked away from in 2018.

Last Wednesday, US Ambassador to the United Nations Kelly Craft and the US envoy for Iran, Brian Hook, briefed the UN Security Council on a proposal to extend the embargo.

Iran's Ambassador and Permanent Representative to the United Nations Majid Takht Ravanchi called on the UN Security Council member-states not to fall in Washington's trap by extending arms embargo on Iran.

"The US resolution proposing to extend Iran's arms embargo is in violation of the UNSC Resolution 2231, and it would be a devastating mistake for the Security Council," Takht Ravanchi said last Thursday.

Takht Ravanchi made the remarks at a news conference focusing on the Americans' claim to their participation in Resolution 2231 and the possibility of using the snapback mechanism to restore the relevant sanctions.

"The provisions of the draft resolution of the United States to extend the arms embargo are in conflict with the UN Security Council Resolution 2231, and should be rejected," he added.

Takht Ravanchi recalled that Russia and China, as two members with veto power of the UNSC, have expressed their full support for the JCPOA, the full implementation of this agreement and Resolution 2231, and said, "In fact, the US act will have implications for international law, as well as future cooperation with the UNSC."

"The UNSC must be aware that it is violating the resolution it has adopted and it would be a devastating mistake for the council to violate its resolution," he added.

"We are under a global arms embargo; arms embargo on one hand and threats by the US and its allies on the other hand. The arms sanctions have created an opportunity for our scientists to build and manufacture defensive needs by reliance on domestic power," General Salami told reporters.