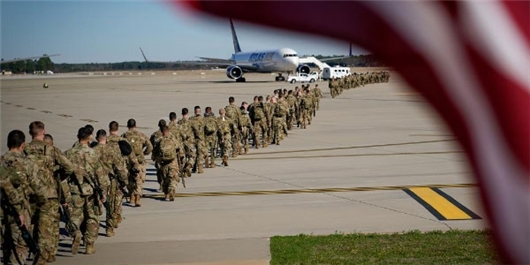 TEHRAN (FNA)- A bipartisan group of senators is trying to place limits on President Donald Trump's ability to remove troops from Germany unless the administration is able to meet a slew of requirements.

The proposal, spearheaded by Sen. Mitt Romney (R-Utah), would prohibit the administration from reducing the number of active-duty troops in Germany below 34,500 unless the Pentagon can certify to Congress that it is in the national security interest of the United States and would not negatively undermine European alliances or NATO, according to The Hill.

It would also require the Defense Secretary to certify that the move would not impact the US military's ability to "execute contingency plans", wouldn't negatively impact ongoing operations, won't impact military families and that the Pentagon has consulted with allies including NATO and Germany.

The senators want to get it included in the National Defense Authorization Act (NDAA), a mammoth defense policy bill set to be debated by the Senate this week. Hundreds of amendments are filed to the NDAA every year but only a handful normally end up getting a roll-call vote on the floor.

In addition to Romney's amendment, Graham filed a separate proposal throwing the Senate's support behind the US-Germany relationship.

"The presence of United States military forces in Germany is a strong deterrent against Russian aggression in Europe and strengthens the capability of NATO," Graham's resolution read.

Trump confirmed earlier this month that he would cut the number of US service members in Germany to 25,000, a decision that has been met with bipartisan scrutiny.

“Germany’s delinquent,” Trump said at the time, adding, “They’ve been delinquent for years, and they owe NATO billions of dollars, and they have to pay it. So we’re protecting Germany, and they’re delinquent. That doesn’t make sense.”

Germany is not on track to meet NATO’s goal of spending 2 percent of its gross domestic product on defense. But it is not “delinquent” to NATO as Trump describes because the spending is not a payment to NATO — it is spending on a country’s own defense — and the goal does not have to be met until 2024.