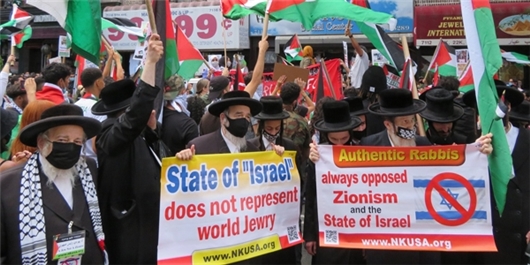 TEHRAN (FNA)- July 1 came and went in occupied Palestine, and despite it long being presented as the day of annexation of the West Bank, nothing happened.

The Zionist regime says the process is effectively delayed, and nothing is imminent. Aides to Prime Minister Netanyahu also say there are delays, but don’t say how long. Seemingly the US is also okay with annexation in the long run.

This is while Israel's annexation of parts of the occupied West Bank has been fiercely criticised by not only Palestinians but by the international community at large.

The plan, which aims to annex all illegal Jewish settlements in the occupied West Bank - including the strategic Jordan Valley - amounts to one-third of the territory and is in line with President Donald Trump's so-called "Middle East plan," which envisages a demilitarised Palestinian state on a patchwork of disjointed parts of the Palestinian territories.

As it has always been the case, the US has sided with the plan and the desperate attempt to focus heavily on defending President Trump’s recognition of Jerusalem Al-Quds as Israel’s capital, won’t change the irrefutable fact that this is still an apartheid regime condemned and isolated the world over.

Israel continues to deny the Palestinians the right to vote, freedom, self-determination and democracy. This is also the same regime that keeps hearing criticisms and condemnations at the United Nations, including internationally-endorsed resolutions that decry Israel as the world’s last Apartheid regime that must be dismantled.

Now more than ever, the international humanitarian community considers the Israeli regime as a permanent menace for the national security of all countries. It supports the Palestinians because they are an oppressed nation plagued by the US-funded Tel Aviv regime which has expelled them from their motherland.

Palestinians are living in poverty in camps in Lebanon, Syria and other countries. They have lost their homes, assets and jobs, and for that reason and no other, defending them is a humane and moral duty.

If that’s not enough, the United Nations’ hearing on its human rights in Geneva has once again accused the Israeli regime of ongoing abuses and anti-democratic policies as it was called out as the world's last functioning Apartheid regime.

While Israel continues to accuse the UN of bias and denies responsibility for the crimes that correspond to the illegal occupation of the Palestinian territories, the independent review by Human Rights Watch has found yet again that the Zionist regime continues a pattern of systemic human rights violations - many of which have recurred consistently over the past 50 years of the occupation and some that have intensified significantly in recent years.

According to the UN HRW's review, those violations include: unlawful killings and war crimes without accountability; illegal settlements and institutional discrimination; forced displacement; prolonged closure of Gaza and unjustified movement restrictions in the West Bank; and abusive detention.

The US should hold its head in shame. Because it is against this condemnable background under international law that it recognised Al-Quds as Israel’s capital and now backs it’s illegal annexation plan.

This policy has only brought US-funded death and destruction to the Palestinians, including colonialism, war crimes, illegal settlements, systematic discrimination, forced displacement, blockade and open-ended war and occupation.

World’s opposition to Zionism and to the colonising regime and policies of Israel is therefore more than a legitimate political position. Even hundreds of thousands of Orthodox Jews have long been protesting worldwide, calling for the dismantlement of this criminal regime that has hijacked judaism, but brought them nothing except for misery and ill fame.