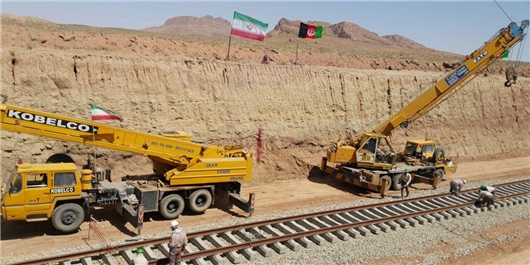 TEHRAN (FNA)- Iranian Minister of Road and Urban Development Mohammad Eslami announced that Khaf-Herat Railway will come on stream by the end of the current Iranian calendar year (March 20, 2021).

Eslami said on Friday that a part of Khaf-Herat Railway will be constructed by Iran while the remaining part will be built by Afghanistan.

Construction operation of the part related to Iran is in the brink of completion, he added.

The minister said the railway is 66 kilometers from border to Khaf city and stated. “The significance of this huge project is that the railway in Afghanistan will be revived, so that the country will be linked with Iran’s national railway network as well as other countries,” he underlined.

Eslami continued, “Iran has a variety of routes such as North-South and East-West Corridors so that transiting Afghan territory and investing in Afghanistan is essential for Iranian traders and also those of Afghanistan.”

Afghanistan’s government has commitments to transfer mining and mineral capacity to other countries, so that an agreement signed between India, Afghanistan and Iran will be effective in this respect, he added.

Khaf-Herat is part of Iran-Afghanistan rail corridor. The project, started in the fiscal year of 2007-2008, connects Iran’s Eastern city of Khaf to Afghanistan’s Western city of Ghoryan.

In relevant remarks in late December 2019, the ministry had announced that an important rail passage between Iran and neighboring Afghanistan would be ready after 100 days as construction of a key cross-border line was nearing completion.