Time for US to Pull Out of Yemen 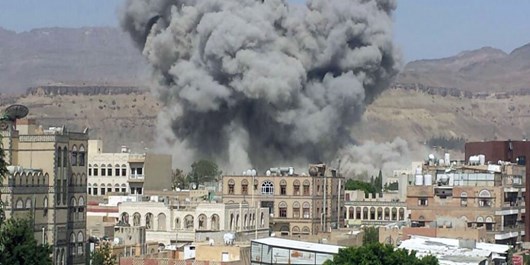 TEHRAN (FNA)- The US Congress is taking another stab at ending US support for the Saudi-led coalition waging an unjustified war on Yemen.

The House Armed Services Committee voted 31-25 to add language to a key defense authorization bill that would ban the Donald Trump administration from using funds to provide the Saudi coalition with logistical support in its illegal war against the poorest country in the Arab world.

This was long overdue. The US has spent more than five years helping Saudi Arabia bombard Yemen, killing thousands of civilians along the way. Now members of Congress say America needs to stop supporting the unnecessary bloodshed.

The House of Representatives had even passed a previous resolution that tacitly said America shouldn’t assist Saudi Arabia in its fight against Yemen.

Whatever this is, it’s time for Washington to end its criminal involvement in Yemen war, but, crucially, the United Nations should also step in to have a say in all this, because the House resolution or bill is nonbinding; it is only a small step forward, and the shift in US foreign policy is not going to happen overnight.

That means the US will likely continue to assist Saudi Arabia by refuelling its planes and providing intelligence in Riyadh’s brutal air war against the defenceless population of Yemen. The US will also continue to sell weapons to Riyadh worth billions and accuse Others of supporting the Ansarullah movement in order to hide its complicity in Saudi war crimes and defuse international criticism.

As maintained by many US officials and Pentagon commanders, the US-backed Saudi-led war on Yemen is unwinnable – despite the attempts by Riyadh to escalate the war even further. Five years into this unnecessary bloodshed should be more than enough for the War Party to reach conclusion that what it has on its hands is yet another endless war that like the one in Afghanistan is unwinnable.

Yemen has suffered greatly due to the US-Saudi blockade and airstrikes that have destroyed hospitals, schools, and other civilian infrastructure. With many people suffering from the coronavirus outbreak, millions of Yemenis need humanitarian assistance to meet basic needs - including food and medicine - out of a pre-war population of 28 million. This clearly makes Washington complicit in Saudi war crimes and crimes against humanity.

US support for the growing humanitarian crisis likely isn’t going away. The US has said that the best way to end the crisis is through "aggressive diplomacy". If that’s the case, then the US, with or without the Congress bill, must immediately stop its military support to the Saudi war, lift the illegal blockade and allow commercial imports at the demand of dozens of aid groups, stop attacking the Ansarullah movement forces, and push the Saudis to move into a political process as quickly as they can – but without any preconditions.

Indeed, the international civil society never welcomes any US involvement in a political settlement when the Americans provide mid-air refuelling for Saudi and UAE warplanes that are conducting air attacks against civilians, plus assistance with bomb targeting on a regular basis, and also not when the Americans are helping the Saudis in their illegal blockade, which is something that goes on very consistently in broad violation of International Humanitarian Law and the UN Charter.

Under the prevailing environment, the United Nations Security Council must hold Saudi Arabia and the United States responsible for their repeated and blatant violations of International Law and International Humanitarian Law in Yemen.

The world body should force the Saudis to accept a non-military solution to the war. There is no other way to advance long-term stability in Yemen and end the suffering of its unfortunate people.