US Navy a Source of Instability in South China Sea 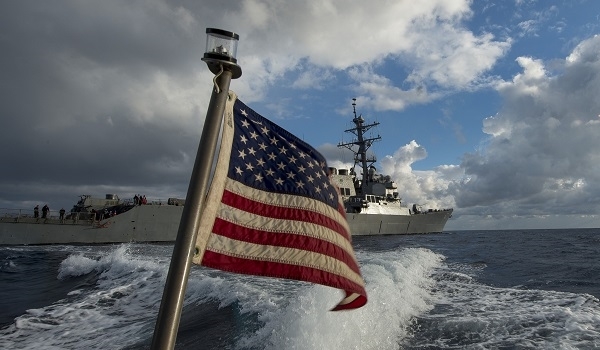 TEHRAN (FNA)- China has every right to accuse the United States of having “ulterior motives” after Washington ran its largest military exercise in the South China Sea in years over the weekend.

China’s Foreign Ministry Spokesman Zhao Lijian has said, “The US intentionally sent a military deployment for large-scale exercises in the South China Sea, and to show off its muscle. They have ulterior motives. The US is creating division among nations in the region and militarizing the South China Sea.”

The exercise coincided with Chinese Naval drills held in the same area near the Paracel Islands, a disputed archipelago. The US Navy’s Seventh Fleet ran the exercise, which involved two aircraft carriers, under the guise of supporting “a free and open Indo-Pacific.”

The Bashi Channel, a waterway just south of Taiwan, has also turned into another flashpoint for the US and China. Friday marked the 13th day in a row that US military aircraft flew over the Bashi Channel. The US sent six large reconnaissance aircraft and two refueling tankers on the mission. The planes were reportedly searching for Chinese submarines in the area.

These latest developments serve as further proof that the United States has never been a force for peace and stability in the South China Sea and the Taiwan Strait. It has never turned away from the deadly arms trade with Taiwan either, let alone stop showing the flag and throwing grenades into Chinese maritime areas.

The US is therefore responsible for contributing to, rather than impeding, the militarization of the South China Sea and the Taiwan Strait. Tensions will not go away as long as the US continues to sell arms to Taiwan and roil the Chinese territories with its naval exercises.

This outlook was made crystal clear once again by Zhao, when he said this week, “The fundamental cause of instability in the South China Sea is the large-scale military activities and flexing of muscles by some non-regional country that lies tens of thousands of miles away.”

At any rate, the Chinese waterway seems to be Washington's new Strait of Hormuz periphery for long-term great-power competition. Certainly, there exists no pretext for the Chinese island and other countries in the region to beef up their forces and invest heavily in America's industry of death to stop the non-existent Chinese tanks and troops from landing across their shores. These nations are not under what the Pentagon terms “growing threat from Beijing,” and certainly, this is not a new Cold War.

However, this has not stopped Washington from selling arms to the region under the so-called US-Indo Pacific strategy. The latest salvo is not just about stirring the waters with American military equipment, or the US meddling in China's internal affairs and breaking from earlier commitments to Beijing; it's also about double opportunity.

The official Washington and Pentagon generals want to project power, police the region, and as a consequence, exert upon China the full impact of their influence in every domain. In order to drive the region to the edge of instability, Washington further sends warships and guided-missile destroyers to goad China on the pretext of “freedom of navigation operations.

These provocative moves and other multi-domain engagements on the peripheries of China are intended to serve America's long-term strategic interests. They are not there to protect the region from China’s non-existent threat.

Regional nations in the Far East should take note: Just like in the South China Sea, America's deadly arms business is also a major cause of conflicts and tensions in other parts of the world, especially in the Middle East, where many Arab countries spend more on military expenditure and war than on regional stability and dialogue combined.

As the Asian nations also proceed down this path, the growing availability of US arms, military support, naval presence and other provocative moves will similarly be a major factor in the increase in the level of tensions in Chinese maritime areas. They would provide no security for these nations but record profits for well-positioned American arms manufacturers.