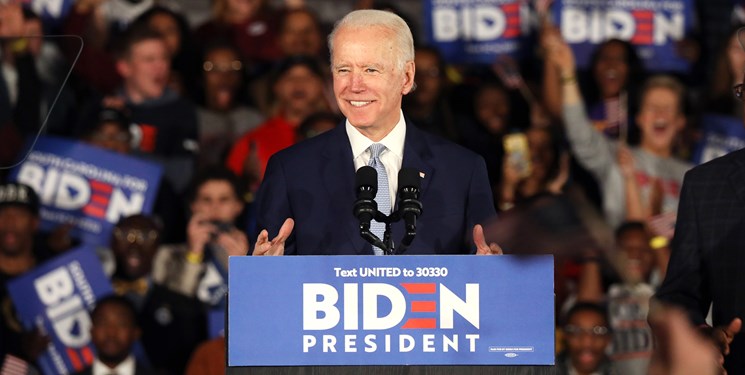 TEHRAN (FNA)- A new poll suggests Democrats from across the party are unifying behind Joe Biden, the party’s presumptive candidate heading into the 2020 election.

The poll, released by The New York Times and Siena College, surveyed 3,870 registered voters in six battleground states between June 8 to June 18. All of the voters surveyed voted in the Democratic primary in their state.

Of voters who supported Elizabeth Warren in the primary, 96 percent said they planned to support Biden in the general election. The remainder said they would support another candidate, and none of them indicated they would vote for President Donald Trump.

Eighty-seven percent of those who supported Bernie Sanders –Biden’s top rival during the primaries and the figurehead for the progressive left wing of the Democratic party – said they were supporting Biden in the general. Four said they would vote for Trump, and eight said they planned to vote for another candidate.

Those numbers have not changed much since a similar poll was conducted in the battleground states – Michigan, Wisconsin, Pennsylvania, Florida, Arizona and North Carolina – last October. At that point, supporters of the progressive candidates said by a 89-4 count that they would support Biden over Trump. Saturday, that spread is 89-3.

Only 81 percent of Mike Bloomberg supporters and 82 percent of Amy Klobuchar backers said they would vote for Biden in November.

The rallying around Biden is not necessarily indicative of overall Democratic enthusiasm for the candidate, however.

Only 21 percent of Sanders’ supporters and 40 percent of Warren’s said they were excited for Biden’s candidacy. Most said their votes for Biden were votes against Trump.

Sanders endorsed Biden in April and asked his supporters to rally behind the presumptive candidate.