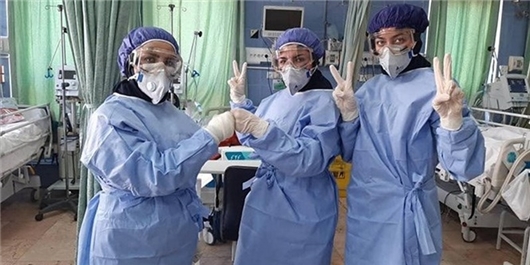 TEHRAN (FNA)- The Iranian health ministry announced on Thursday that 267,061 coronavirus cases have been identified in the country so far, adding that 198 patients have passed away since yesterday.

“2,500 new patients infected with COVID-19 have been identified in the country during the past 24 hours and 1,914 patients have been hospitalized,” Iranian Health Ministry Spokeswoman Sima Sadat Lari said on Thursday, adding, “The total number of the COVID-19 patients reached 267,061.”

“Unfortunately, 198 patients have lost their lives in the past 24 hours, increasing the number of the dead to 13,608,” Sadat Lari added.

She expressed pleasure that 230,608 patients infected with coronavirus have recovered or been discharged from hospitals.

The spokeswoman also expressed concern that 3,471 coronavirus patients are in critical conditions, adding that 2,073,791 diagnosis tests have been conducted across the country.

Iranian President Hassan Rouhani said last month that over 1,000 medical centers in the country have received necessary equipment to conduct tests on people suspected of infection to coronavirus, and added that Iran ranks first in the Muslim world in scientific achievements.

Also, earlier this month, he said that the country will increase the number of its hospital beds to 8,000 by the end of the current Iranian year (March 19).

He added that 1,500 hospital beds for special cases have also been added to the capacity of the country's medical system since the outbreak of coronavirus in the country, noting that 2 drug production lines are also added every month to the country's pharmaceutical capacity.

The coronavirus COVID-19 is affecting approximately all countries and territories around the world. The virus was first reported in the central Chinese city of Wuhan late last year. It has so far killed more than 587,300 people and infected over 13.7 million others globally.