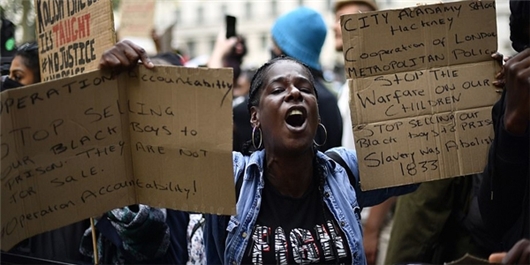 TEHRAN (FNA)- People are more likely to say that racism has got worse or stayed the same during their lifetimes than it has become less common, according to a poll that paints a bleak picture of discrimination in the UK.

The study, exclusively shared with The Guardian, finds that almost two-thirds of the population think there is a “fair amount” or “great deal” of racism in British society today but black respondents are twice as likely as white respondents to say the problem is very widespread.

When asked about their personal experiences, large numbers of black, Asian and other minority-ethnic people reported incidents of racial abuse – both verbal and physical – with many experiencing attacks regularly.

Muslim men and women are thought to face the most discrimination, followed by black men and women. Other Asian groups appearing to fare better.

But perhaps most striking in the poll – which was carried out by Number Cruncher Politics for the ITV programme Stephen Lawrence: Has Britain Changed – is the lack of perceived progress over the years.

In total, 55% of ethnic minorities said racism had stayed the same or got worse during their lifetimes, compared with 29% who felt that it had reduced.

That trend looks even more striking among black respondents: 34% think racism has worsened in Britain and 30% see no change. That means two-thirds of black people see no progress compared with just a quarter who do.

Sunder Katwala, who runs the thinktank British Future and is an expert on race in British society, stated things had got better but people wanted to see faster progress.

Speaking after weeks of Black Lives Matter protests across the world, Katwala said, “It is clear that there have been significant social changes on race over the last quarter of a century – but what this poll captures is that expectations have risen considerably faster.”

He added overt racism was less prevalent than in the 1980s and 1990s and that ethnic minorities had more voices in public life but added that the poll showed frustration of young people hearing politicians focus on the “bad old days” of people being beaten up by National Front “thugs” when they wanted a focus on the realities of everyday racism in 2020.

He noted there was a reluctance to say things had got better in case it was seized upon as a way of diluting the urgency. He announced the hurdles were clearly higher for Muslim and black people.

The black Conservative candidate for London, Shaun Bailey, who is appearing on the programme screened on ITV at 8pm on Thursday, tweeted in advance that he had “been stopped and searched hundreds of times”.

Matt Singh, founder of Number Cruncher Politics, was able to look at the unique experiences of different ethnic groups because of the size of the BAME sample, which was half of the 3,000 respondents.

“The challenges in polling of ethnic minorities have meant that work of this nature has not been not often conducted on this scale. This research sheds new light on how people view racism in modern Britain, their lived experience, and what they think should and shouldn’t change,” he stated.