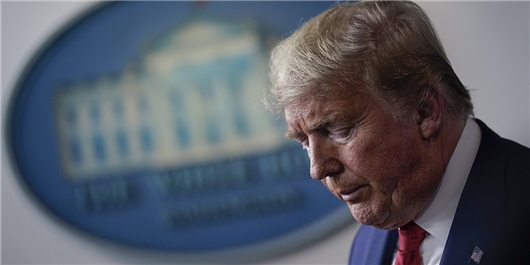 TEHRAN (FNA)- The administration of President Donald Trump took control of COVID-19 data in the United States, leaving public health experts gravely concerned about whether anyone outside the administration will be able to access the vital information moving forward.

Such data is critical for health systems to plan for necessary resources and coordinate efforts, particularly during a pandemic, according to NBC News.

"Whoever controls the data is in the driver's seat. They have the power," said Dr. Christopher Ohl, a professor of infectious diseases at Wake Forest Baptist Health in Winston-Salem, North Carolina.

"I'm concerned that we'll only get what their analyses and conclusions are, and there won't be any way to corroborate it," Ohl added.

Late Tuesday, a Spokesman for the Department of Health and Human Services, confirmed that hospitals are now required to submit information on COVID-19 patients directly to HHS, rather than through a longstanding reporting system via the Centers for Disease Control and Prevention.

"The new faster and complete data system is what our nation needs to defeat the coronavirus and the CDC, an operating division of HHS, will certainly participate in this streamlined all-of-government response," said Michael Caputo, HHS' assistant secretary for public affairs, adding, "They will simply no longer control it."

Dr. Robert Redfield, the director of the CDC, stated Wednesday that the agency will still play a role within the new reporting system.

"No one has taken access or data away from CDC," Redfield noted at a news briefing, insisting that the change would help to "dramatically improve and modernize our public health data in America".

Jennifer Nuzzo, a senior scholar at the Johns Hopkins Center for Health Security, stated, "I fully support an effort to try to improve upon existing approaches. That said, I have deep worries about switching it up in the middle of a crisis, particularly if it means sidelining the CDC."

José Arrieta, HHS' chief information officer, said the agency is "exploring the best way to make this information available to the public", but he and Redfield declined to offer a timeline.

Nuzzo added, "For the data to be valuable, it needs to be trusted. And that's really where transparency comes into play. People have to be able to scrutinize the data to understand the process by which they are generated and be able to see the strengths and weaknesses."

Ohl said the previous reporting system within the CDC, called the National Health Safety Network, has been in operation for years.

"All of the kinks are worked out," he noted, adding, "It's reliable, sound, unbiased."

It remained unclear how hospitals — already strapped for resources — would be able to pivot effectively to a new reporting system during the pandemic.

Ohl said such a change is unprecedented, adding, "It just doesn't make sense".