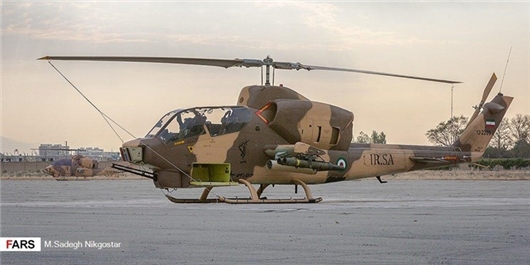 The IRGC’s Airborne Unit in a ceremony participated by IRGC Top Commander Major General Hossein Salami on Monday unveiled several achievements, including the new laser-guided missile system for Cobra helicopters which are fired and guided by the pilot as well as S-24 rockets mounted on Mi-171 helicopters.

Earlier today, Commander of the IRGC Ground Force’s Airborne Unit Brigadier General Mohammad Rahmani had announced that hi-tech missiles have been mounted on the Unit’s helicopters.

“The IRGC Airborne Unit’s helicopters have been equipped with advanced missiles and we have made highly good progress in the equipment of the combat drones with weapons in the past two years,” General Rahmani said on Monday.

Also, Commander of the IRGC Ground Force Brigadier General Mohammad Pakpour said on Monday that the IRGC Airborne Unit has made acceptable progress in the past 3 years.

“The IRGC Airborne Unit has made nearly 70% quantitative and qualitative progress in the helicopter field,” he added.

General Pakpour said that no problem in access to helicopters and related parts exists in the operational regions and Iran has attained self-sufficiency in production of parts for helicopters.

"We are under a global arms embargo; arms embargo on one hand and threats by the US and its allies on the other hand. The arms sanctions have created an opportunity for our scientists to build and manufacture defensive needs by reliance on domestic power," General Salami told reporters.

He stressed that extension of the arms embargo against Iran "will not affect our defense power and we will witness the unveiling of surprising systems (by the IRGC) in the near future".

General Salami also said that the IRGC Ground Force does not need imports of any military systems from foreign states.