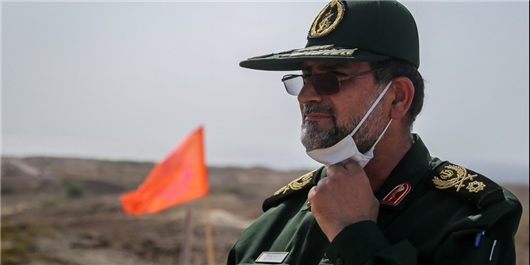 TEHRAN (FNA)- Commander of the Islamic Revolution Guards Corps Navy Rear Admiral Alireza Tangsiri said that exercising protection of the Iranian islands in the Persian Gulf was one of the main goals of the IRGC's recent wargames.

Rear Admiral Tangsiri said on Wednesday that the main purpose of the recent military exercises has been to protect the Persian Gulf islands and deterring those who sow insecurity in the region.

He also named "friendship and convergence of the Muslim countries in the region" as the other target of the held wargames in Southern Iran.

The commander added that the wargames have not been a threat to any of the regional countries but a warning to those who seek insecurity in the region.

The IRGC announced in a statement on Tuesday that it has started the final phase of the 'Great Prophet-14' drills in the South of the country, and added that Nour-1 Satellite, that was launched on April 22, is being used to monitor the wargames.

The wargames are being monitored for the first time by the Nour-1 Satellite that was launched successfully on April 22.