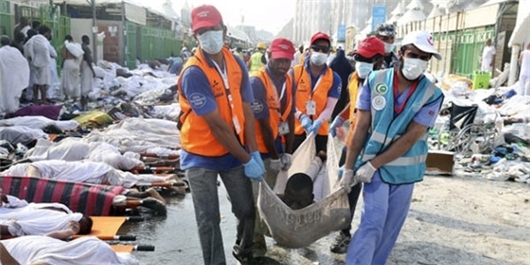 TEHRAN (FNA)- Iran announced on Thursday that it still continues efforts to restore the rights of the victims killed during the Mina disaster and the Mecca crane collapse in 2015.

Iran’s Hajj and Pilgrimage Organization and the Representative of Leader of the Islamic Revolution Ayatollah Seyyed Ali Khamenei in Hajj Affairs in a joint statement on the threshold of the 5th anniversary of the Mina disaster and the Mecca crane collapse underlined that Tehran is seriously pursuing the rights of victims.

It added that Eid al-Adha (Feast of Sacrifice) reminds Muslims and the Iranian nation of a “bitter memory”.

The statement criticized the silence of international rights bodies and media on the deadly incidents, saying it was only Iran that spoke in defense of the victims' rights.

“Although the Mina tragedy and the crane collapse incident at Mecca’s Grand Mosque happened before the eyes of the Islamic Ummah, the silence of international organizations and media added to the pain of the families of the two disasters’ martyrs,” it said.

Iranian officials in charge of the Hajj affairs have always underlined the need for clarifying the dimensions of the Mina tragedy through the formation of a fact-finding committee including the representatives from the countries that lost their pilgrims in the incident, it added.

It further complained that the Saudi government has not published an official report on how the tragedy occurred and has not taken responsibility for it.

“On the fifth anniversary of the Mina tragedy, the Representative of Leader of the Islamic Revolution Ayatollah Seyyed Ali Khamenei in Hajj Affairs and Iran’s Hajj and Pilgrimage Organization … emphasize that they have diligently followed up on the rights of the martyrs of Mina and Grand Mosque and will keep doing so until the desired results are achieved,” the statement read.

A stampede during one of the last rituals of the Hajj season on September 24, 2015, killed at least 7,477 people and left thousands wounded.

The stampede occurred during the ritual known as "stoning the devil" in the tent city of Mina, about two miles from Mecca.

At least 465 Iranians lost their lives in the incident, while hundreds of others were wounded.

Earlier that month, a massive construction crane operated by the Saudi Binladin Group conglomerate collapsed onto Mecca’s Grand Mosque, killing more than 100 pilgrims, including 11 Iranians, and injuring over 200 others, 32 of them from Iran.

On September 30, 2015, Ayatollah Khamenei warned Saudi Arabia that the slightest disrespect for the Iranian pilgrims who were in Mecca for the Hajj ceremony would be reciprocated with Tehran's harsh and crushing response.

Ayatollah Khamenei called for setting up a fact-finding committee of Iranian and other Islamic countries' authorities to probe the death of Hajj pilgrims in Mina and missing of hundreds of them, and said, "The Saudi government is not complying with its responsibilities to transfer the bodies of those who have been killed (in Mina stampede) and the Islamic Republic of Iran has so far, respected the brotherhood in the Muslim world by exercising self-restraint and Islamic politeness but they should know that the slightest disrespect for tens of thousands of Iranian Hajj pilgrims in Mecca and Medina and any lack of  responsibility to transfer the bodies will result in Iran's crushing and violent reaction."

Ayatollah Khamenei underlined that Iran did not want to have an early judgment of the cause of the incident "but we believe that the Saudi government hasn’t acted upon its responsibilities with regard to the injured pilgrims in the Mina incident and has left them desperate and thirsty".

He said Iran had so far practiced self-restraint over the death of its citizens in Saudi Arabia, "but they should know that Iran's hand is above many others and it enjoys more possibilities too and if it wants to show reaction to annoying and insidious actors, they will not have a good situation and they won't be able to gain victory on any scene of rivalry."

"The Islamic Republic of Iran doesn’t practice cruelty but it also doesn’t accept anyone's oppression and cruelty; therefore, it doesn’t trample on the rights of any human beings and nations, either Muslim or non-Muslim, but if anyone wants to trample Iran and its nation's rights, he/she will receive a strong response; and thanks God, there is a capability for such a confrontation and the Iranian nation is powerful and resistant," Ayatollah Khamenei underscored.