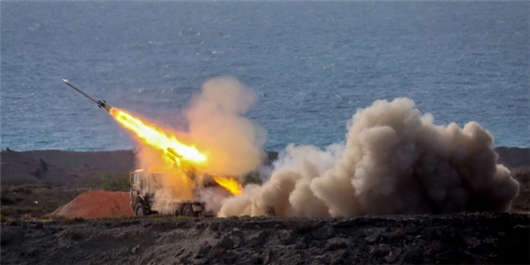 TEHRAN (FNA)- The Islamic Revolution Guards Corps (IRGC) in a statement on Thursday declared the end of its massive drills in the Southern parts of Iran and the Persian Gulf, stressing full preparedness to give a crushing response to any possible aggression against the country.

"The exercises which were held with the participation of the IRGC Navy and Aerospace Force in the general area of ​​Hormozgan province, the Persian Gulf and the West of the strategic Strait of Hormuz ended successfully with implementation of all plans and combined operational exercises on land, sea, and in the air and space," the statement said.

"Complex and various operational wargames, including firing [buried] ballistic missiles from the depths of the earth, destroying (hypothetical) enemy's radar systems, firing coast-to-sea and ship-to-ship missiles to destroy the warships, drone drills to attack the enemy aircraft carrier's command bridge, capturing hostile vessels by carrying out heliborne operations and using surface-to-surface and coast-to-sea missiles in the presence of observers of Khatam al-Anbia Central Headquarters were exercised in their best form," it added.

The statement noted that the Islamic Republic of Iran has never started a war, stressing that safeguarding independence, territorial integrity, security, national interests and the geographical area of the country, specially the Persian Gulf islands, comprises its defensive strategy and it clearly and strongly considers decisive, crushing and finishing response of the IRGC and other powerful defenders of the country against the aggressors as one of its main and negligible principles.

The IRGC announced in a statement on Tuesday that it has started the final phase of the 'Great Prophet-14' drills in the South of the country, and added that Nour-1 Satellite, that was launched on April 22, is being used to monitor the wargames.

The wargames are being monitored for the first time by the Nour-1 Satellite that was launched successfully on April 22.