Supreme Leader: American Nation, Not Others Main Enemy of US 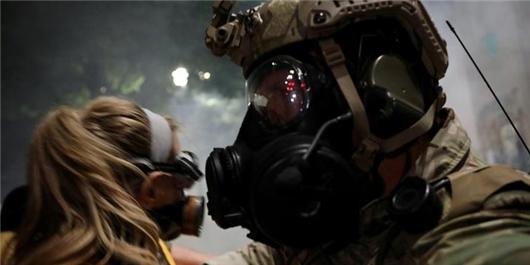 TEHRAN (FNA)- Supreme Leader of the Islamic Revolution Ayatollah Seyed Ali Khamenei said that the US government’s biggest enemy is the American nation, not Iran, Russia, or China, adding that what the Americans used to repeat as ‘Hot Summer’ in Iran has now gripped themselves.

Ayatollah Khamenei made the remarks in a live televised speech on Friday on the occasion of Eid al-Adha or the Feast of Sacrifice, and noted that the United States should not look for enemies outside the country as its biggest enemy is inside the country, namely the American nation.

He reiterated that the Americans said last year and the year before that there would be a ‘hot summer’ in Iran, while they themselves are now suffering from ‘Hot Summer”.

He also emphasized that the current protests in the US are ‘fire beneath ashes’ that will eventually destroy the ruling system.

Ayatollah Khamenei went on to say that US circles admit failure to achieve their objectives through maximum pressure on Iran.

“The US has always sought to undermine Iranian morale since the advent of the Islamic Revolution,” he stated.

The Supreme Leader said although the US tries to suggest that the sanctions are against the Islamic Republic Establishment, the truth is that they target the nation.

He descrbied sanctions as a major crime against the Iranian and other nations.

Ayatollah Khamenei noted that the sanctions pursue many objectives, but the main objectives can be categorized in the short-term, mid-term, long-term and side-objectives.

He said that the enemies, as a short-term objective, have targeted the patience of the nation by overestimating difficulties to make the public stand against the establishment.

"The sanctions are also aimed at impeding Iran's scientific progress and also cause the government to fail in economic field," Ayatollah Khamenei continued.

He further noted that the sanctions intend to push the Iranian government to a state of bankruptcy, as the long-term objective.

"The enemies also seek the side-objective of undermining Iran's ties with resistance groups across the region which they have surely failed to achieve," Ayatollah Khamenei said.

He stressed that with this wave of sanctions, the enemies have simultaneously engaged in efforts to distort facts, and added, “Once this distortion and falsifying fails, the sanctions too will fail because this is a battle of wills.”

Pointing to the current situation in the US, the Supreme Leader said, “The United States suffering from social gap, dire economic, managmentl problems makes confusing remarks on others to cover its own domestic problems.”

The United States has been suffering mismanagement in dealing with the coronavirus outbreak and its economic aftermaths. Also, the US cities have been the scene of unrests ever since cops killed an unarmed Black man, George Floyd.

On Thursday it was announced that the administration of President Donald Trump is sending additional federal agents and funding to Cleveland, Milwaukee and Detroit, expanding a program that has targeted Democratic-run cities facing increases in violent crime.

The Department of Justice (DOJ) announced the deployment of dozens of federal officers to the three cities to assist local law enforcement as part of Operation Legend, according to The Hill.

The administration has already sent agents to Kansas City, Mo., and Chicago as part of the program as Democratic leaders express reluctance about the government's intentions amid clashes involving the Department of Homeland Security (DHS) in Portland, Ore.

"For decades, the Department of Justice has achieved significant success when utilizing our anti-violent crime task forces and federal law enforcement agents to enforce federal law and assist American cities that are experiencing upticks in violent crime," Attorney General William Barr said in a statement.

"The Department of Justice’s assets will supplement local law enforcement efforts, as we work together to take the shooters and chronic violent criminals off of our streets,” he added.

The DOJ is sending more than 25 federal investigators from the FBI, Drug Enforcement Administration and the Bureau of Alcohol, Tobacco, Firearms and Explosives (ATF) to Cleveland to assist state and local law enforcement focused on gang activity, gun violence and drug trafficking. The city's police department will also receive $10 million to fund the hiring of additional officers.

Roughly 40 agents from the same agencies are being dispatched to Detroit to assist the city's police department, including 11 new permanent ATF agents who will focus on violent crime. The city will also receive $2.4 million to hire new officers.

The DOJ will send another 25 agents to Milwaukee, which is set to host the Democratic National Convention next month, to combat violent crime. The federal government is providing $10.2 million to fund the hiring of officers in the Milwaukee, Wauwatosa and Cudahy police departments.

The department cited increases in violent crime in each of the cities, noting homicides and shootings are up in all three places compared to 2019.

Trump last week announced similar deployments of federal agents to Chicago and Albuquerque as part of Operation Legend, which is named for a young victim of gun violence in Kansas City. The administration has repeatedly invoked the program to argue Trump is imposing law and order.

But the operation has solely targeted Democratic-run cities thus far, and Trump has repeatedly blamed local leaders for the rise in violent crime. He has simultaneously warned that the problems would worsen if presumptive Democratic presidential nominee Joe Biden were elected, even as the unrest is taking place under Trump's watch.

Some Democratic leaders have been reluctant to accept help from the Trump administration, citing concerns over the federal government's involvement in Portland. DHS dispatched Border Patrol and other agents to the city to guard a federal courthouse, but demonstrators have reported that unidentified agents have detained protesters and clashes have devolved into violence at times.

Trump on Wednesday morning vowed that the federal presence would remain in Portland "until they've secured their city".

The Associated Press reported that the administration is in talks with state and local leaders about drawing down the federal presence to deescalate the situation.