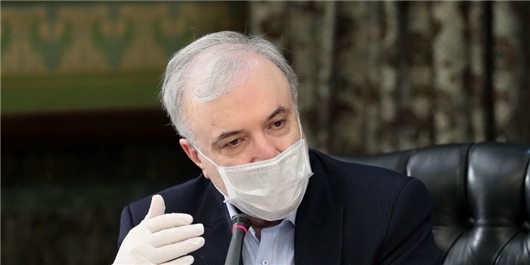 TEHRAN (FNA)- Iranian Health Minister Saeed Namaki said that his country managed to produce and even export medical equipment two months after the coronavirus outbreak despite the US harsh sanctions.

“Being able to turn into a producer and exporter of medical equipment from an importer in less than two months was one of the important achievements of the country which happened with the assistance of the Headquarters for Executing the Order of Imam (Khomeini),” Namaki said in a meeting with Head of the Headquarters Mohammad Mokhber in Tehran on Sunday.

He also lauded the Headquarters’ efforts to produce drugs for coronavirus patients as “eye-catching”, saying that Iran could decrease the death toll of infected people with COVID-19 virus to 30 in the first wave of the virus epidemic through national mobilization of all bodies and institutions.

Mokhber had announced last month that the country's researchers had tested the home-made anti-COVID-19 virus vaccine on animals with successful results.

“The Iran-made vaccine produced by our colleagues at the Headquarters has successfully passed the animal tests and now we are preparing for tests on humans after receiving license from the health ministry,” Mokhber told reporters.

He also said that Remdesivir - a drug believed to be of help in fighting the coronavirus – has been produced by the Headquarters at a lower price than its foreign version and distributed in the market and will be mass-produced upon a request of the Iranian health ministry.

Also in July, Vice-President for Science and Technology Sorena Sattari said from day one of coronavirus outbreak in country, knowledge-based companies rolled up sleeves and met internal needs without dependence on imports.

Almost nothing related to COVID-19 has been imported from other countries and everything has been secured with reliance on domestic capability, Sattari said at Scientific and Technological Park of Hamedan, Western Iran.

He added that since the very onset of the disease, knowledge-based firms worked strenuously and manufactured the domestic need to medical and health items such as ventilator, face-mask, and so on.

Sattari underlined that these firms have worked strongly during the virus era, adding that three batches of new medicines will go to the market within three weeks.