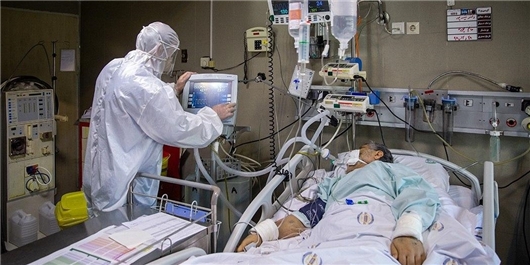 TEHRAN (FNA)- The US warships near the Chinese port of Qingdao have seized a ship which carried zeolite needed for manufacturing oxygen concentrators for coronavirus patients.

"Few days ago, we received a letter saying that our ship has been seized by a US warship at the port of Qingdao, making delivery of the cargo to us under a question mark, which gave us a bad shock," Peyman Bakhshandeh-Nejad, the CEO of Zist Tajhiz Danesh Pouya company in Iran, told FNA on Wednesday.

“To produce oxygen concentrators we need to import only one part which is zeolite and we are forced to purchase it from France and import it to the country through several middle parties,” he added, elaborating on the cargo.

He said that the ship which was carrying zeolite for manufacturing the oxygen concentrators for coronavirus patients was seized at Qingdao port, adding that the cargo could lead to the production of 4,000 to 5,000 oxygen concentrator systems to be used by the patients.

Bakhshandeh-Nejad dismissed claims that the US sanctions do not leave impacts on Iran’s medical and health sectors.

An oxygen concentrator is a device that concentrates the oxygen from a gas supply (typically ambient air) by selectively removing nitrogen to supply an oxygen-enriched product gas stream.

A pioneering knowledge-based company in Iran had also in April produced a special oxygen concentrator system which can be used by the coronavirus patients at home.

“Oxygen concentrator is the knowledge-based product of the company. When the lungs are not powerful enough to pump the necessary oxygen into the blood, the system can increase the purity of the lungs’ oxygen,” Ali Ebrahimi, the CEO of the company, said.

He added that the system has been manufactured in three home, central and portable versions.

Ebrahimi said that one of the most important applications of oxygen concentrator systems is for coronavirus patients who can use it at home without any need to visiting hospital.