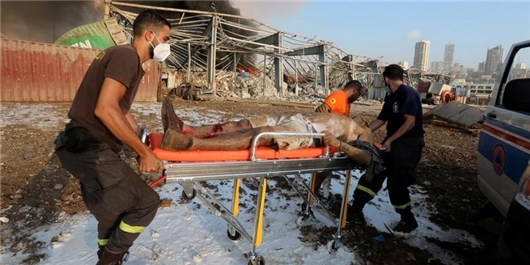 TEHRAN (FNA)- The US and Israel gain the most benefits from the Tuesday explosion and devastation in Beirut, a prominent analyst said, adding that Tel Aviv and Washington have always been after economic and security pressures on Lebanon.

“At present, the Americans and the Zionist regime are the most beneficiaries, specially after one of Hezbollah forces was martyred in Israel’s bombings in the past few weeks and Israel feared Hezbollah’s harsh revenge,” Seyed Reza Sadr al-Hosseini told FNA on Wednesday.

“It seems that the Zionist regime benefits from the explosion in short term as it may delay Hezbollah’s retaliation,” he added.

Sadr al-Hosseini said that the US and Israel were in the past few years after increasing economic and security pressures on Lebanon to foment unrests and prevent internal integrity in the country.

A massive explosion rocked the Lebanese capital of Beirut on Tuesday, killing at least 100 people, wounding over 5,000 more, and smashing a vast area.

Terrifying footage showed a huge mushroom cloud of fire and smoke covering much of Beirut’s port area, blowing out windows and destroying buildings in the neighborhood, as a warehouse at the Beirut docks caught fire on Tuesday afternoon.

Photos on social media showed many buildings in the area damaged or destroyed, leaving residents covered in glass and blood.

Several smaller explosions were heard before the bigger one occurred and turned the city’s streets into a debris-strewn wasteland.

In addition to local authorities, more than 30 Red Cross teams are responding at the scene of the blast.

Health Minister Hamad Hassan blamed the explosion on a fireworks accident, ordering all hospitals in Beirut to prepare for the victims of the incident.

Head of the Lebanese Red Cross George Kettaneh also stated that hundreds of injured people were taken to hospital for treatment, while some still remain trapped in their homes.

Hotel Dieu Hospital in Beirut reported it was treating more than 500 injuries and was not able to receive more. Tens of injured needed operations, the hospital said appealing for blood donations. Rizq Hospital also said that it has admitted 400 wounded people.

The health ministry said all Beirut hospitals are overcrowded with those injured in the incident and can no more accommodate anyone.

Yet, the health minister told Lebanon's LBC News that hundreds are feared dead and thousands have been wounded in the blast. He added that the death toll now stands at over 100.

The Lebanese Red Cross also declared that over 5,000 people have been wounded in the incident, while the numbers are still expected to rise. It added that over 100 dead bodies have been collected from the scene of the incident so far.

“It resembles to what happened in Japan, in Hiroshima and Nagasaki. That’s what [it] reminds me of. In my life, I haven’t seen destruction on this scale," Abboud added.

Badri Zaher, Director General of the Lebanese Customs House, declared that dozens of tons of nitrate had exploded in the port of Beirut.

Lebanese General Security Director Abbas Ibrahim also dismissed rumors of Israeli involvement, noting that a large cache of highly explosive sodium nitrate was stored at the site, after being confiscated off a ship several months ago. But he did not explain how the fire has started.

Early reports said a short-circuit has likely sparked fire at the warehouse where the huge sodium nitrate cargo was kept and fire later spread to an adjacent warehouse where a huge cargo of fireworks was stored.

Yet, there is still no official report on the exact cause of the blast, while a UN spokesperson told reporters that his organization is still unsure whether the explosion was "an accidental or man-made act".

Later, the Israeli Defense Force denied responsibility for the massive explosions in Beirut. Hezbollah has also denied the blasts were the result of a rocket attack.