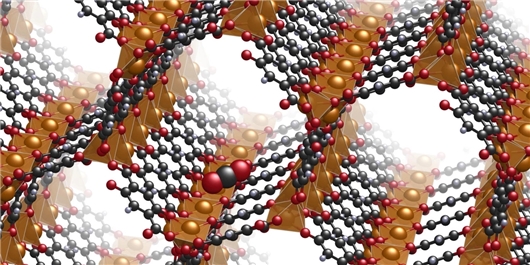 TEHRAN (FNA)- Information can be encoded into many patterns, such as ones and zeroes for computers. A new proof of concept has been demonstrated to encode information into artificial molecules, which could enable programmable materials or new types of computers.

The key ingredient is materials called metal-organic frameworks (MOFs). These network-like structures are made up of clusters of metal ions linked with organic ligands, and they’re often used as experimental “sponges” for removing pollutants from air and water.

For the new study, researchers at the University of California, Berkeley and Ruhr-Universität Bochum (RUB) set out to make them programmable. Most MOFs are made with one metal at a time, but here the idea is to arrange different metal ions in particular patterns and combinations, to encode information that could potentially be read back by a specially-designed device. It’s the same basic principle behind computers reading and writing information in ones and zeroes.

In this case, the team used a particular version of the material called MOF-74, which is arranged in oxide rods connected into a honeycomb lattice. The researchers used metal ions of cobalt, cadmium, lead and manganese as the “bits” of data, and read the information back using an imaging technique called atom probe tomography (APT). And the team successfully showed that the technique worked in principle.

With further tweaking, this method could be used to make a range of programmable molecules and materials, that perform multiple actions in sequence. For example, the team says that a MOF could introduce drugs into the body at different speeds, and break them down when no longer needed. They could also someday capture carbon dioxide from the air, then convert it into useful chemicals.